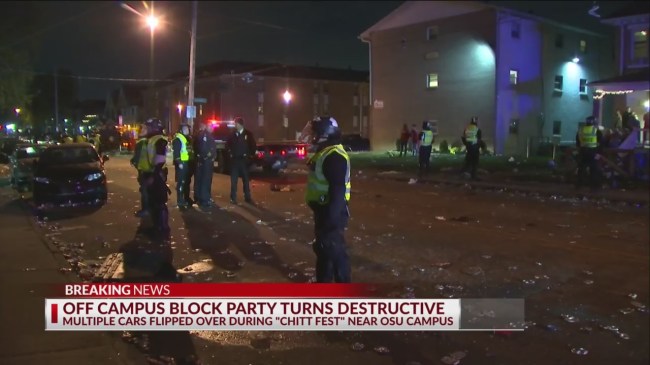 Ohio State students went absolutely wild last night for seemingly no apparent reason. A cluster of electric scooters stuck in a tree, crushed beer cans, smashed cars and shards of glass were all that remained on Chittenden Avenue in Columbus, Ohio on Sunday after an annual block party called went full-on ‘Project X.’

Another look at the Chitt Fest aftermath @10TV pic.twitter.com/N2p4gYEzWO

Cleanup is now underway this morning after several cars were flipped during “Chitt Fest” (large block party) on Chittenden Avenue. More coming up on @nbc4i pic.twitter.com/UD5V2bnPkU

Police estimated that about 1,000 “Chitt Fest” attendees crowded the street during the yearly party that is held on the day of the Buckeyes’ spring game. Things started to get out of hand around 10:45 p.m. on Saturday and at least five cars were flipped, many windshields were smashed, and there was litter everywhere. No arrests were made when the party was dispersed in the early morning on Sunday, but Columbus police are working with the school to identify students involved.

“Last night’s property destruction and willful disregard for safety just off campus is unacceptable. Ohio State will work with local law enforcement to identify and hold responsible any students who took part,” university spokesperson Ben Johnson said in a statement.

The scene was bonkers and the students were jammed into every open space.

Hahahahah that's my apt building on the left at Chitt Fest pic.twitter.com/cSKUE6F4Hh

At least two cars were flipped and the Chittenden Ave sign stolen at the intersection of Chitt and Indianola Saturday night pic.twitter.com/iU7RLPZ0SK

Chitt Fest is a full blown riot at this point lmao my god the tear gas canisters from hell are about to be deployed pic.twitter.com/fz56TvTBAC

Despite university, state, local and federal COVID-19 guidelines, about a thousand Ohio State students flocked to Chittenden Avenue Saturday for an evening that resulted in several flipped cars and Columbus Police helicopters being called in — but police made no arrests. pic.twitter.com/QeYXRqYxh0

Then things started to go south when the highly-intoxicated students decided to destroy everything in sight.

7 cars were flipped over and totaled on Chittenden Ave. last night…yet 0 ppl were held accountable.The privilege that Ohio State University keeps pretending doesn’t exist is really getting old. And at this point, it’s clear students of color aren’t being taken seriously at all! pic.twitter.com/s99LfttDlW

All of the flipped cars have been towed away and city street sweepers were called in to try and clean up all of the beer cans and trash left behind, but the damage was already done. There isn’t much justification for what took place, but after a long year of COVID-19 restrictions, students are looking for any excuse to party as the semester comes to a close and Chitt Fest offered that chance. They took it and went a little (way) too hard.