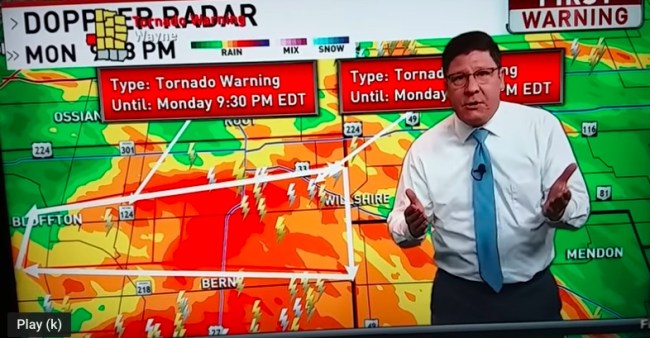 A cluster of tornadoes ripped across both Ohio and Indiana Tuesday night, smashing up homes, peeling away roofs, blowing out windows, and killing one person while injuring 90 more. The heaviest damage was reported just outside of Dayton, Ohio, where a popular sports complex was severely damaged and an 81-year-old man was killed after a parked car was blown into his house.

As CBS reports, Monday marked the “record-tying 11th straight day with at least eight tornadoes in the U.S.,” with as many as 53 twisters touching down Monday across eight states stretching eastward from Idaho and Colorado.

Dayton Fox 45 weatherman Jamie Simpson was just trying to prepare Ohio residents for potential life-threatening weather on Monday, but since the warning interrupted Monday’s episode of The Bachelorette, they just treated him like a flight attendant running through the safety instructions on a flight full of college spring breakers.

“I was just checking social media, we have viewers complaining already, ‘Just go back to the show.’ No, we’re not going back to the show, folks. This is a dangerous situation, okay? Think about if this was your neighborhood. I’m sick and tired of people complaining about this. Our job here is to keep you safe and that is what we’re going to do.

“Some of you complain that this is all about my ego. Stop, okay? Just stop right now. It’s not. I’m done with you people, I really am. This is pathetic.”

What Mr. Simpson doesn’t understand is that Monday’s Bachelorette rose ceremony was the most dramatic yet and Hannah was going to send some really good guys home, and we can’t have that electric broadcasting be interrupted just because we may or may not die a horrible death. Know your audience, Simpson, God.