I Tried The New Old Bay Goldfish Crackers: A Review 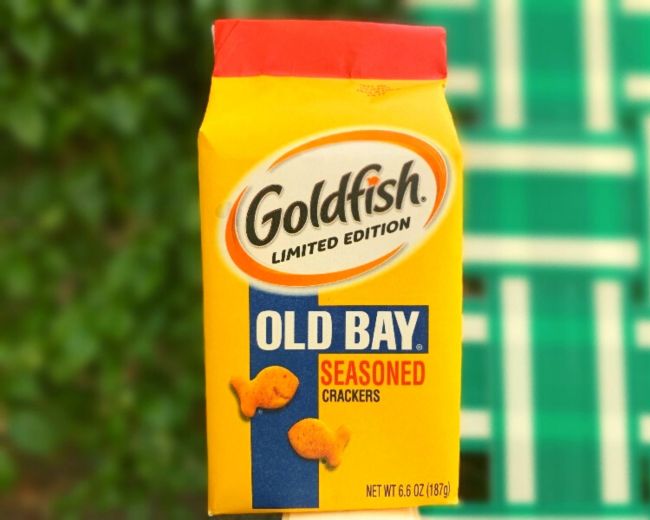 I grew up in the Chesapeake Bay watershed, just a couple of miles from the Pennsylvania-Maryland border. If you grew up in that neck of the woods, as I did, you know that Old Bay seasoning is pretty much a lifestyle. It’s savory in the most unique way possible – an extraordinary blend of 18 herbs and spices. It’s tangy, with a kick that can’t be matched on seafood and chicken.

There’s nothing like it in the culinary world, which is why very few try to imitate it.

It’s a seasoning with a unique geographical identity that just doesn’t translate to other regions. When Old Bay’s parent company, McCormick, stopped using tin and switched to plastic containers a couple of years ago, my uncle – born and raised on Maryland’s Eastern Shore – texted me the news. Somewhat woebegone, he said he was the end of an era and asked me to keep an eye out for Old Bay tins in California grocery stores. They’ll be an antique someday, he said.

That’s how seriously people take Old Bay. It’s just one of those things you get if you spent summer nights spent picking crabs on a backyard patio, tossing back domestic cold beers with family and friends.

Old Bay is everywhere these days

Old Bay is so much more than a seasoning. It’s a bloody mary-enhancer, a chicken wing seasoning, a popcorn topping for movie nights.

Old Bay is everywhere – an entire universe of Star Wars-esque IP that’s synonymous with loving seafood. It’s an affinity. Head to Ocean City, Maryland or Rehobeth Beach, Delaware and you can’t miss Old Bay shirts hanging in boardwalk t-shirt shops. The idea of rocking an Old Bay outfit was beyond comprehension 25 years ago.

Alas, a shortlist of more ways Old Bay is omnipresent in the culture:

This brings us to McCormick’s latest Old Bay innovation:

Old Bay has always paired up well with snack food. Herr’s Old Bay chips, for example, or the more generic UTZ Crab Chips. These are widely available at every Wawa, Sheetz, and grocery store in the I-95 corridor, from North Carolina to New York.

For a limited time, McCormick is teaming up with Goldfish manufacturer Campbell’s Snacks for Old Bay Goldfish. This marks the second time McCormick has collabed with Goldfish – last year, they released Frank’s RedHot Goldfish. It was “ranked as the fastest-selling launch of Summer 2021,” according to a press release. 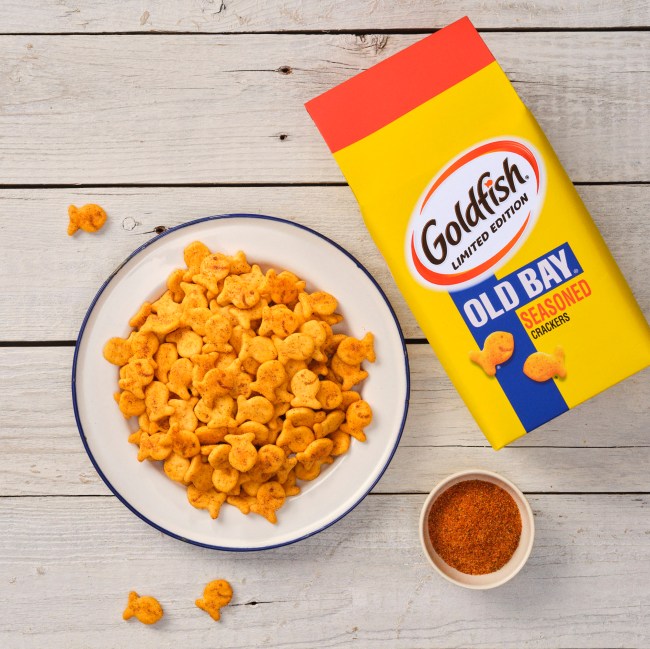 Old Bay Goldfish are rolling out nationwide this summer, available wherever you get your snacks. According to a press release, a limited quantity will also be available on the McCormick website, starting in early May 2022. The suggested retail price is $2.79 for a 6.6oz bag.

I got a chance to sample Old Bay Goldfish ahead of their national rollout.

First of all, let’s talk about the packaging. They nailed it. The bags look like the classic Old Bay tins, complete with a red top.

As true Old Bay heads know, a little bit can go a very long way. They didn’t overdo it with the Old Bay. Rather, it perfectly compliments the saltine cracker’s buttery crunch. The best way I can describe the taste is like sitting down at a wood picnic table at a crabhouse. It’s drool-worthy and craveable yet not as intense and salty as Old Bay can be on potato chips.

It hits all the flavors – black pepper, paprika, celery salt, red pepper flakes. The zest brings back all kinds of summer memories – trips to Camden Yards, dinners on Kent Island.

Don’t sleep on Old Bay Goldfish. Just like the summer itself, they won’t be around forever.