Old People Who’ve Never Heard Drake, Post Malone, Or Cardi B Try To Sing What They Think Their Songs Sound Like 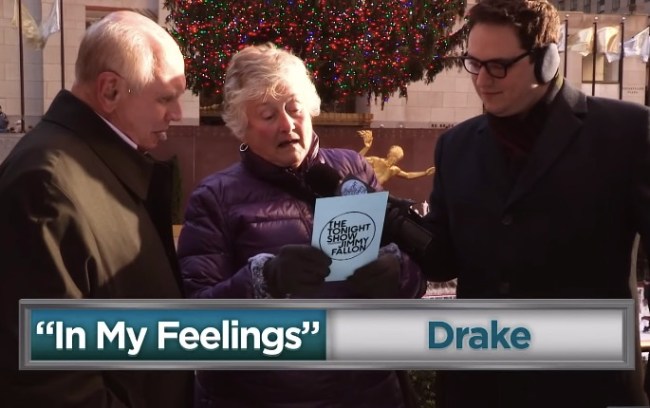 I’m a sucker for the genre you could classify as ‘Pop Rap’. Looking at my Spotify Year-In-Review earlier this week 3 of my top 5 tracks were from Kodak Black. I think there was a Drake song in there at #5. These catchy and repetitive beats from artists like Cardi and Post have sucked me in.

In the car, I mostly listen to live concerts from Phish, the band I’ve seen in concert more times than I’d ever want to admit. But, if I’m driving 13 minutes to the gym then there’s a decent chance I’m listening to ‘Hip-Hop Nation’ on Sirius-XM with Torae or DJ Suss One. Yeah, it takes me exactly 13 minutes to drive from my house to the gym.

It’s come to my attention that a large swath of old people in America only listen to politics radio or other forms of talk radio when they get in the car. So many people out there are never exposed to any music at all and this is evidenced in this latest clip from The Tonight Show Starring Jimmy Fallon.

The crew is outside of the Rockefeller Plaza Christmas tree and they’ve found people who have never heard Post Malone, Drake, Migos, or Cardi B. They ask them to sing the songs based on how they’d expect them to sound. The older the people are the more likely they sing them like Christmas Carols. Nobody seems to understand what Cardi’s saying.

That balding redheaded dude with the beard and Canadian accent actually crushed Cardi B’s “I Like It.” He wasn’t spot on to the tempo but he was pretty damn close for someone who’s never heard the song before.