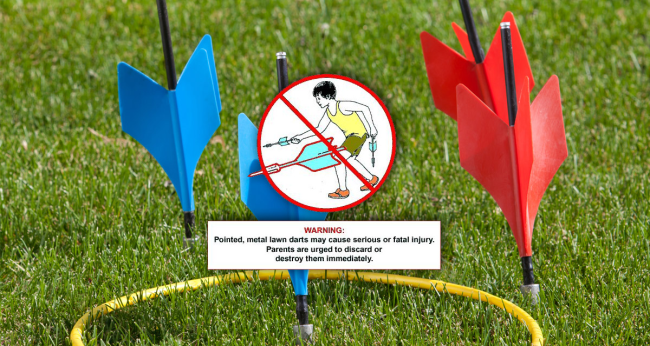 Back in the day, kids toys were a lot different. Many of the old school toys kids used to play with would be considered too dangerous today.

For exhibits A through Z, see the photo above of a game of lawn darts, or jarts, as they were often called.

Why were they called jarts? Because it was short for “javelin darts.”

That’s right. Kids used to stand at opposite ends and lob javelin darts towards one another, often unsupervised, and this was considered to be an okay idea. Seriously, they sold thousands of these sets.

Lawn darts were amazingly still being sold up until December 19, 1988 when the U.S. Consumer Product Safety Commission introduced a ban on them in the United States.

In the eight years prior to the ban, 6,100 Americans had had to visit a hospital emergency room for some sort of lawn dart-related injury (81% were age 15 or younger).

So, considering adults all over the world considered jarts to be fun for the whole family for so many years, you know, until enough people got killed or maimed, on Sunday, someone on Reddit asked the question, “What toys did you have as a child that would be considered too dangerous to be given to a child today?”

See if any of these responses sound familiar.

“I have a crayon melter that melts crayons and lets you pour it into molds so you could make your own crayons and rings,” wrote TheMemeSniper. “Turns out production stopped because of a failure to stop the heater from being turned on if the lid was opened.”

“I had an incredibly heavy metal square looking robot that spit smoke it produced from burning oil,” wrote Grave-Diffin. “It smelled noxious and was heavy enough it could have easily been a murder weapon.”

Pretty sure we had that one too.

“I never owned one, but you could buy a radioactive science kit that came with real radioactive material and a geiger counter,” wrote aching-tiffany, and yes, this really did exist at one time.

“I remember these inflatable oversized boxing gloves and the commercial showing kids punching each other,” responded crackityazz.

We used to beat the hell out of each other with those. Good, clean fun!

Skydancers and Beyblades were also popular mentions for their ability to slice up your hands, face, eyes, pretty much any body part they touched while spinning as massive rpms.

“Survival knife. We all had these after the Rambo movies,” answered Siderian. “7” serrated blade, compass on the hilt, a garrote you could take off in case you had to strangle someone, and matches in the hilt.”

He’s not kidding. I had one of those too. How am I still alive?

“Creepy Crawlers. It was the safer, 90’s version, but you could still burn yourself on those metal molds,” wrote HardKor1283.

“Super Elastic Bubble Plastic,” wrote crimson_maple. “It was a goo in a tube that you squirted onto the end of a straw and you could blow giant marbled bubbles. Problem is it was made of noxious chemicals like polyvinyl acetate and acetone, so you almost got high off it.”

“Clackers. None of us broke our arms, but, man, those bruises were mean,” answered Francesami.

Those were literally lethal weapons.

Also making the cut, the original Lite Brite with its 8,000 degree hot light bulb, any toddler pull toy with a long string, fake guns that looked 100% real, the original Polly Pockets, metal Tonka trucks, Fisher Price people that were the perfect size to get caught in a child’s throat, wood burning kits (loved my wood-burning kit), slap bracelets, and playground equipment that was embedded in concrete or asphalt and included at least one metal slide that in the summer heat would scorch the skin clean off your legs, plus see saws and merry go rounds that could break all sorts of bones.

Of course, lawn darts also got a mention, with standing_lamp writing, “When the game was over, we used to throw them in the air and then run for our lives.”

Who didn’t do that?