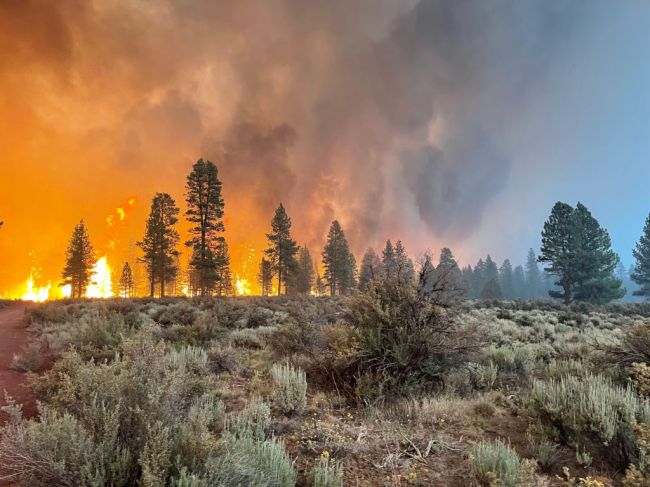 As of Tuesday morning on InciWeb, Oregon’s Bootleg Fire has burned more than 388,359 acres and is only 30% contained. To put that terrifying number in perspective, the fire is burning more than 600 square miles— an area one third of the size of Delaware, half of the size of Rhode Island and larger than Los Angeles.

The Bootleg Fire in Oregon has already burned through 300,000 acres — and officials fear that it might not be contained until November pic.twitter.com/Se4tNX6KK3

The Bootleg Fire is a result of climate change and it was spurred by months of a deep drought and an unprecedented heat wave last month. It is currently one of 80 fires burning across 13 western states.

As the sun sets across the central and eastern United States this evening, smoky skies fill the horizon due to distant wildfires burning across western Canada and the Intermountain West.🌇 pic.twitter.com/SCGbP9khVK

However, the Bootleg Fire in particular is more deadly and destructive than normal.

UPDATE: Oregon's #BootlegFire continues to expand in size, seen here yesterday afternoon and evening from @NOAA's #GOES17🛰️. According to @inciweb, the #wildfire had grown to 300,000+ acres and was just 25% contained at last report. #ORwx pic.twitter.com/1cUiTMMmDx

Typically, the weather predicts what a fire will do. In this case, the fire is predicting what the weather will do.

The Bootleg Fire is so large, and it is generating so much energy and heat, that it is literally creating its own weather. Specifically, Oregon state fire officials say that it is showing “aggressive surface spread with pyrocumulus development.”

Pyrocumulus development is when clouds form as the extreme heat from the flames of a wildfire force the air to rise rapidly. That, in turn, condenses and cools any moisture on smoke particles produced by the fire.

When this happens, pyrocumulus clouds essentially turn into their own thunderstorms. However, there is no rain associated with the storms.

The dry storms only bring lightning and strong winds. The strong winds cause the fire to continue to be unpredictable and grow. It is a never ending, frightening cycle.

Officials worry that the fire, which has been burning since July 6, may not be fully contained until November. That is four months from now.

As of Tuesday afternoon, more than 2,000 people are evacuated from their homes, 67 homes and 117 minor structures have been destroyed. That count only continues to grow as the fire spreads.

The spread of the Bootleg Fire has averaged nearly 1,100 acres per hour for more than 13 straight days. That rate would burn New York City’s Central Park in 45 minutes.

As pyrocumulus clouds begin to form, there is little hope for progress. Wind gusts up to 25 miles per hour are expected over the next few days.

The Bootleg Fire is the third-largest wildfire in the state’s history and will likely become the largest by the time it is extinguished. The Long Draw Fire in 2012 burned 557,028 acres.

Officials are reminding the public that fighting the fire, like the one in 2012, is a marathon, not a sprint.