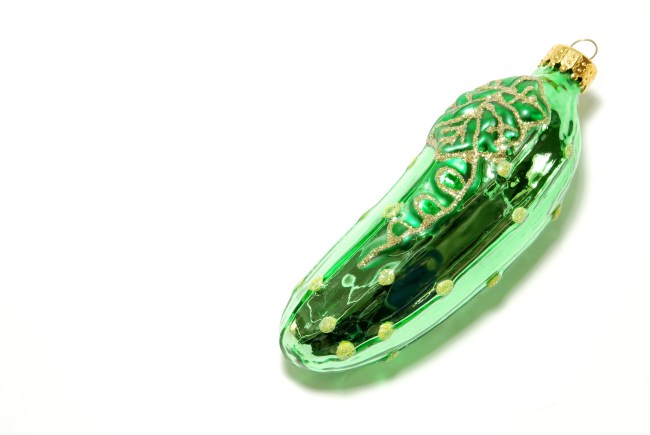 Growing up we always had a pickle ornament on the Christmas tree but I never questioned it or even paid much attention to it. We didn’t talk about the ornament or play any games involving the ornament, it was just kind of there.

I didn’t even really realize we had it until I came across this article explaining the origins of the pickle Christmas tree ornament in America. This is apparently much more widespread than I ever imagined. And it has roots in Germany but most Germans have never heard of it because it’s a tradition that was popularized by German immigrants in America.

Long ago when parents decorated the Christmas tree, they hung the pickle ornament, hiding it in the tree. When the children were allowed to see the tree, they searched for the pickle because the first to find it would receive an extra gift from Santa for being the most observant. pic.twitter.com/3BAEVIDffX

Here’s the story, via Cosmo:

While the quirky custom known as Weihnachtsgurke, or Christmas Pickle, supposedly has its roots in Germany, apparently most Germans haven’t even heard of it. In fact, the New York Times reported that out of 2,057 Germans polled, YouGov determined 91% were unaware of the legend. The pickle ornament tradition is actually most popular in the Midwest, says the publication.

But the origin of the salty snack as a Christmas tradition is a bit of a, well, pickle. No one really knows the truth. In one tale, a villainous innkeeper trapped two boys in a pickle barrel, and St. Nicholas himself set them free, according to Tampa Bay Magazine. Others say a Civil War soldier (and German immigrant) being held captive in Georgia begged for and was given a pickle, which ended up sustaining him. But a third theory suggests perhaps it was a mere marketing scheme. In the 1840s, German glassblowers made ornaments shaped like fruit and nuts, so pickles might have been a possibility, and by the 1880s, F. W. Woolworth Company (the American five-and-dime store) started importing them to sell, paired with the story. (via Cosmo)

You can buy your own Christmas Tree pickle ornament from these thousands of options on Amazon.

It’s kind of bullshit that they put forth all of these potential origin stories when in reality it was almost certainly a marketing scheme as they suggest. You have a wave of German immigrants coming to the midwest missing their homeland during Christmas time. OF COURSE they’re going to want a pickle Christmas tree ornament as a reminder of common German cuisine.

The Christmas pickle is my children's favorite part of Christmas morning. Gonna turn it into a Pickle Rick this year! pic.twitter.com/5cDmbNUJuy

Given that my family hung the pickle ornament I’m guessing that it came from my dad’s side of the family which has a heavy Midwest presence. But I’m curious when the tradition of finding the present got lost or if there are a ton of other families out there who just hang the ornament without playign the game. Any of your bros experience this?

You can buy your own Christmas Tree pickle ornament from these thousands of options on Amazon.