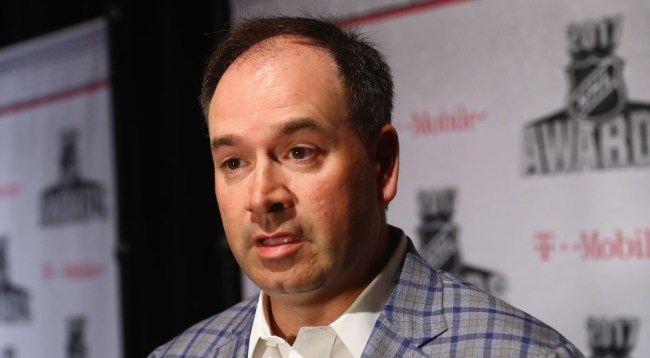 The 2018-2019 NHL regular season is almost upon us with teams beginning their pre-season schedule of games. One of those teams that held their first pre-season game on Tuesday was the Ottawa Senators who played the Toronto Maple Leafs in Lucan, Ontario.

The Senators are coming off a disappointing 28-43-11 record during the 2017-2018 season. But after going 44-28-10 and making it to the Conference Finals, losing to the eventual Stanley Cup champion Pittsburgh Penguins, the year before there is still reason for fans of the team to be optimistic.

Or, well, there was.

At least until the Senators’ GM Pierre Dorion was interviewed in the booth during the broadcast of the team’s first pre-season game of the year and was asked, “What’s the number one thing you’re optimistic about in terms of the Ottawa Senators?”

Needless to say, hockey fans were not very impressed with Dorion’s answer, so they responded as people on the internet do, with jokes.

Dorion – "What am I supposed to say?"
Friedman – "The hell is this guy going to say?"

We are a team that plays hockey. We wear skates. We are alive.

If you look closely you can actually see the gears turning

What are you optimistic about? pic.twitter.com/xRwADiE9Ur

On the plus side, hockey fans, Dorion’s answer did provide us with this…

The Ottawa Senators officially begin their 2018-2019 NHL regular season on October 4th versus the Chicago Blackhawks.

Boy, those Sens fans must be pumped!