I Cannibalieve It’s Not Cattle: Should We Be Preparing Ourselves For Human Steaks? 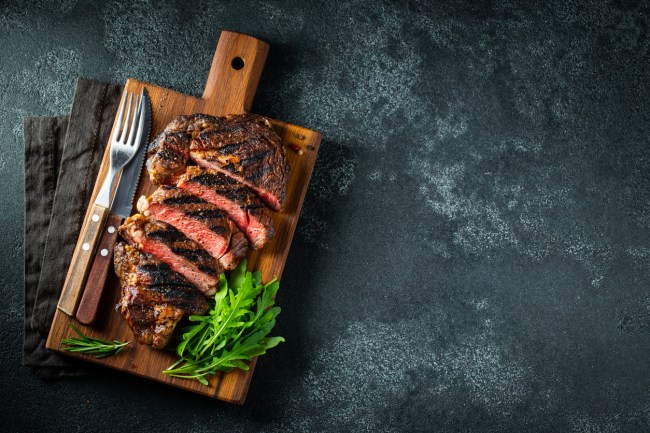 “But if you’re gonna dine with them cannibals Sooner or later, darling, you’re gonna get eaten . . .” ― Nick Cave

There’s no man alive who hasn’t thought about what it would be like to taste human flesh. Not even you! It’s not that we’re all on our way to becoming a culinary monstrosity like Dr. Hannibal Lector, pairing our Doug’s and Steve’s with fava beans and a nice chianti, but we’re intrigued by it nonetheless. Maybe this morbid curiosity is just the dark reverberations of our caveman DNA, and there’s still a sliver of our very core prepared to do whatever it takes to survive a long cold winter.

Or maybe we just want to see if it tastes like chicken.

Well, it might not be long before we have the ability to grow our own human nuggets. Seriously, a team of American scientists has apparently developed a food kit that uses human cells and discarded blood to give birth to a style of meat that doesn’t require a chainsaw to procure. The basis for this dystopian nourishment is DNA harvested from a person’s mouth and fed serum derived from donated blood. The outcome is hunks of test-tube steaks that are technically human.

Mmm-mmm, it’s meat so good, it’ll have you saying, “I cannibalieve it’s not cattle.”

But whoa! Hold on a second there, partner. Ouroboros Steak, the company charged with bringing this culinary bloodlust to all of mankind, stops short of calling it cannibalism. How can it be when the steaks are made with the consumer’s own DNA? “Expired human blood is a waste material in the medical system and is cheaper and more sustainable than FBS, but culturally less-accepted,” scientists said. “People think that eating oneself is cannibalism, which technically this is not.”

We don’t care what they call it. If we could eat ourselves, we’d never leave the house.

Listen, don’t let the thought of human steaks, patties, and nuggets freak you out too much. It was just a matter of time before science had us mealing down on copies of ourselves. In 2018, Israeli researchers grew the very first test-tube beef slab using a similar process to the Ouroboros folks that basically made steaks without killing anything. So why not step it up and make socially acceptable edible people, right? It’s a process that has animal rights advocates, Christians, and other moralists questioning whether humanity’s laboratory shenanigans are on the right track or just a day away from doom. But hell, considering all of the shocking events that have transpired over the past several years, Sci-Fi sustenance seems to be the least of our worries. We just hope that our preference for white meat doesn’t all of a sudden make us a target for the cancel culture.

Everyone understands by now that a lot of the meat they are buying in grocery stores is loaded up with steroids, and those animal parts may have been born without heads and feet. We are genetically modifying the crap out of living things these days to provide more quality products, make animals more comfortable with their environment, and reduce the carbon footprint. Or so they say. It’s just as possible that science only wants to see what kind of freaky stuff it can pull off. It’s kinda like giving a kid chemistry set on his birthday. They might do one or two experiments from the instruction manual, but eventually, they’re going to try to blow something up.

Although the concept of creating meat from human cells might sound a bit strange or even have some of you puking in your mouths, just know that we are a ways off from eating people – or any other test tube animals. There hasn’t been any laboratory meat approved for human consumption as of yet. But prepare yourself for it, because it is definitely coming. The New York Times says the next billion-dollar company will be one that grows laboratory meat. And this technology could be what finally stops world hunger. Laboratory grown meats are expected to feed 10 billion people by 2050. Whether those people will be eating test-tube cows, chickens, or humans remains to be seen. We’re just excited that the phrase “eat me” could be making a comeback.