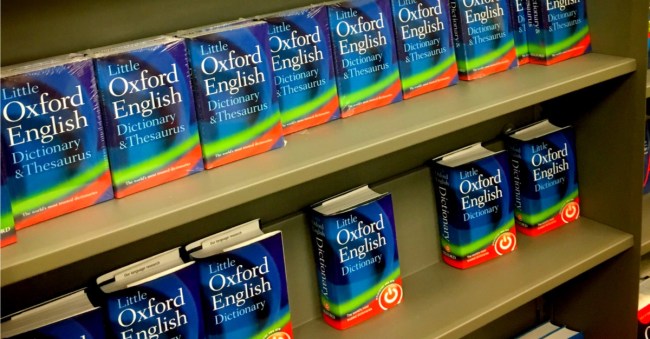 Oxford Dictionary just revealed their “Word Of The Year” for 2017 and it’s a word that no one has ever spoken, written, read, heard or used in any fashion whatsoever. Seriously, I am pretty sure that the Oxford Dictionary is just making words up now to get attention.

I say that because this isn’t our first go-round with the Oxford Dictionary pulling this kind of stunt. Back in 2015, their “Word Of The Year” wasn’t even a word, it was… an emoji. No, I am not kidding.

Last year, 2016, their “Word of the Year” was also something no one on the planet had never heard uttered: “post-truth.”

According to them, post-truth is “an adjective defined as ‘relating to or denoting circumstances in which objective facts are less influential in shaping public opinion than appeals to emotion and personal belief’.” Umm, okay?

Every one of those makes sense.

But as you’ve just read, they have been pretty much just making things up over the past couple of years and 2017 is no exception.

Tell me, honestly, if you have ever heard or said Oxford Dictionary’s “Word Of The Year” for 2017.

That’s right, their “Word Of The Year” is YOUTHQUAKE.

Youthquake? Even my spell-checker as I type it says that it IS NOT A REAL WORD.

They claim that youthquake is a noun “defined as ‘a significant cultural, political, or social change arising from the actions or influence of young people’.”

Guess I am going to have to take their word for it.

Sooo… why did the folks over at the Oxford Dictionary choose youthquake?

The data collated by our editors shows a fivefold increase in usage of youthquake in 2017 compared to 2016, the word having first struck in a big way in June with the UK’s general election at its epicentre.

So, basically, it went from being used once in 2016 to five times in 2017? Because that I would believe. Especially since no one, even people that actually LIVE in the UK, have ever heard of this word.

Irish website JOE wrote a headline that read “Not a single person has ever used the 2017 word of the year.”

British website UNILAD wrote this headline, “Oxford Dictionary Word Of The Year Is Something No One’s Heard Of.”

No one on Twitter has ever heard of it either.

I have never heard or seen anyone use that word. https://t.co/mnjbeKLTkk

Ah, “youthquake”, the well-known word of the year that was used about about twice in the UK media before today. pic.twitter.com/wvwpzaS60a

Apparently it’s all about "youthquake", "antifa" and "broflake". Yeah. I had to Google them too… https://t.co/QZiOuUR9Ar

I'm off to a discotheque tonight and might do the youthquake.

Did I use it correctly?

Learning that milkshake duck narrowly missed on being Oxford dictionary’s word of the year, losing out to “youthquake”. What a wasted opportunity.

if you have never heard of #youthquake you are not alone pic.twitter.com/6WxyHhcVpF

I’m pretty sure they made this up. Searches on Google for #Youthquake over the last week: pic.twitter.com/cCKy6axJDy

The only time someone has used the term #youthquake is whilst searching for what it means. pic.twitter.com/w5pLL8dd4w

The Dictionary people: the word of 2017 is #youthquake!
Everyone else: pic.twitter.com/N7T5cyxGGH

Just read that Oxford dictionaries named #Youthquake as their word of the year for 2017.

I read a large selection of news every day for my job. Number of times I’ve read Youthquake… Once. Today.

I think word of the year should be #The. It’s still largely ignored but popular.

Pete Burns was ahead of his time #youthquake pic.twitter.com/5V92NE0ocV