Pablo Escobar’s Pet Hippos In Colombia Are Multiplying, Growing, And Nobody Can Stop These Beasts 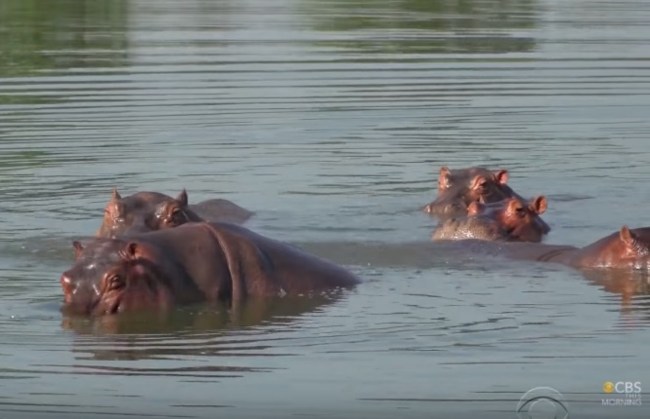 Africa. Specifically, Sub-Saharan Africa. That’s the only place on the planet where the Hippopotamus is in its native land. Anywhere else and these deadly creatures are probably found in a zoo.

Hippos are often considered to be among the deadliest animals on the continent of Africa and that’s attributable to their ornery disposition. These animals are always pissed off. And when they’re super duper pissed off they sweat a blood-like red substance that’s straight up horrifying. There was one incident in Niger where hippos capsized a boat and 13 people were killed.

Pablo Escobar, the most notorious drug lord in history, was a fan of collecting exotic animals at his Napoles ranch in Colombia. He imported some hippos as pets. Pablo was eventually killed but that didn’t stop the hippos, they kept on breeding, multiplying, and growing near Napoles.

This recent CBS This Morning special takes a look at the growing hippo population in Colombia and how it’s threatening life nearby:

I can’t ever think about hippos without my mind jumping to that scene in Congo (1995) where they were traveling across a body of water at night and the hippos tore their boats to shreds. I was young, that scene was startling, and ever since I’ve just assumed that you’d have to be fucking crazy to go near hippos.

So what I’m saying here is I guess Pablo Escobar was crazier than anybody gives him credit for.

It’s pretty insane that this all started with only 4 hippos smuggled in for Pablo’s exotic zoo and now it’s come this far. They’re not quite like the toads in Australia but these hippos are definitely a serious problem that needs to be solved before locals lose their lives.