Watch A Guy Dominate A 2,000-Person Paintball Match By Obliterating Everyone With A Paintball Flamethrower 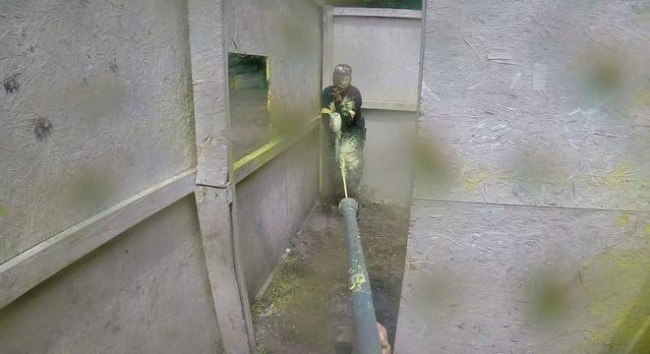 The paintball arms race is heating up with the latest and greatest weapon being a paintball flamethrower. It’s as cool as it sounds. This guy brought a Super Soaker filled with paint to a paintball gun and totally dominated.

We take you to Sniperz Den in Saint Paul, Oregon where there was a 2,000-person paintball match. Craig Palmer of Palmers’ Pursuit Shop Paintball Supply located near Sacramento, California, was ready for the massive battle. He brought with him a secret weapon — a paintball flamethrower.

Palmer holed up in a building and doused any enemies who dared come within his realm. The continuous flow of paint looks expensive, but also cool AF. Unless you’re the guy who just got splashed with a gallon on paint then it’s probably not cool AF. Palmer’s victims would be right to question the legitimacy of a gun that sprays paint everywhere. Then again, you should adapt a different strategy because the paintball flamethrower only has a range of about 10 feet.

Craig Palmer (Palmer Pursuit Shop) let me try out his custom-built paintball flamethrower during the final DMZ battle at Supergame, a 2000 person game in Oregon at Sniperz Den. It was by far one of the most fun things I’ve ever done in my paintball career. It’s a freaking PAINTBALL FLAMETHROWER.

We really need to have a national discussion about common sense paintball flamethrower control laws.