Pandemic Divorces Are Soaring, Here’s How Your Relationship Makes It Out Alive 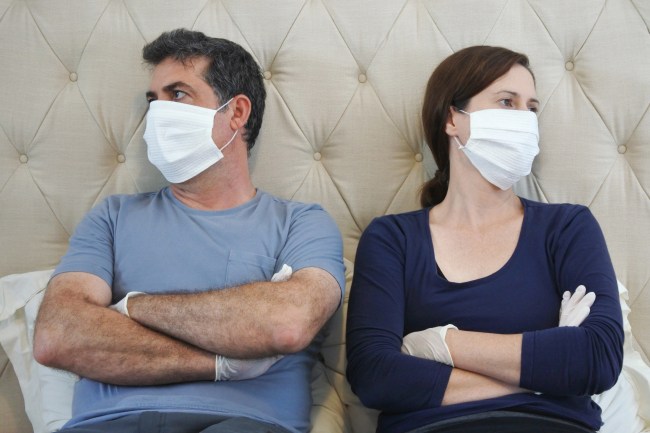 Latest reports indicate that divorce rates in America has soared 34% and newlywed separations have doubled to 20 percent during the pandemic.

As it turns out, vows don’t have a pandemic clause and the only thing to talk about after five months of shared forced downtime is who gets custody of the dog.

I love my lady, but I’d be lying if I told you I hadn’t seriously considered the logistics of sneaking out in the middle of the night and traveling to a small fishing village in Mexico called Zihuatenejo, restoring an old boat, and waiting for my old friend Red to surprise me by wearing dress shoes on the beach.

“The Pacific has no memory,” I whisper softly to myself as I mindlessly roll into another season of MasterChef with the same person as yesterday.

I’ve started referring to my marriage as Nana, because it’s at high-risk. For my marriage, or any marriage, to survive in these unprecedented times, we must adapt, both individually and as a couple.

Here’s the roadmap for the lost.

It’s healthy to remind yourself that you two exist separate from the relationship. After all, you cannot give yourselves fully to the partnership if you’ve lost your vision of who you are without it.

You can achieve this by unexpectedly leaving twice a week to play 36 holes of golf and pounding enough warm beers to make you forget you shot a +38.

Wear the plaid sweatpants instead of the blue ones for once. Add a little hot sauce to that bean dip, recipe be damned. Start a new Netflix series about a grisly murder in a landlocked state that is being investigated by a spiraling cop who gets so wrapped up in the case that his wife leaves him. Fight the urge to envy him.

CHOOSE YOUR HILLS TO DIE ON.

Every morning upon entering the shower, I am greeted with a wad of hair in the drain that looks as if Big Foot had just gone through his first round of chemo. And every morning, I grow a hair more resentful.

Bringing the shower Furby sitaution up to my wife would surely result in a Discussion that weaves my flaws into a general lesson about antiquated gender norms, so I do what any real man does, internalize it and then punch a bag of sand in the garage until my knuckles bleed.

UP YOUR PULLOUT GAME.

Investing in a pullout couch is absolutely essential in a successful pandemic marriage because it allows you to maintain a good night’s sleep after she kicks you out of the master for double IPA-induced flatulence and repeatedly sleep-talking the lyrics to Stacie Orrico’s 2003 hit “There’s Gotta Be More To Life.”

I guess the old adage is true:

“If you love someone, let them go and screw Lenny from next door. If she comes back, she’s yours. If she doesn’t, finally some time to your damn self.”