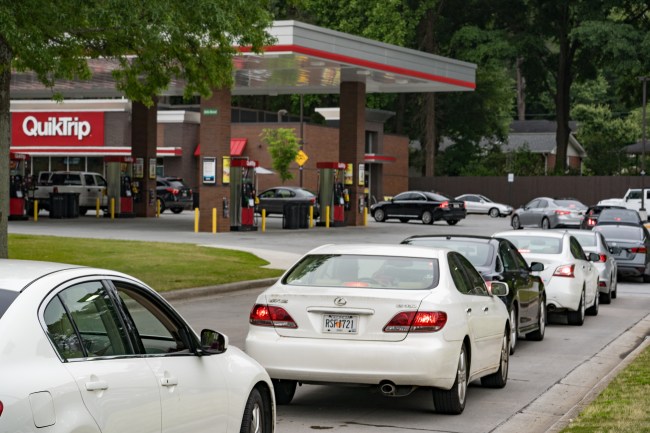 People are losing their minds and panic buying tons of gas after a cyberattack struck the Colonial Pipeline last week by Russian ransomware group Darkside. The hoarding of gas due to the fear brought on by the cyberattack is leading to fuel shortages in several states across the southeast.

A cyberattack on a major oil and gas pipeline has resulted in thousands of American from Texas to New Jersey panic-buying petrol, which is itself leading to shortages: https://t.co/VR6RhpCzcJ pic.twitter.com/3Oy5JXVAhY

Gas stations in the southeastern U.S. are running out of fuel as people hoard gasoline, fearing there will be shortages.

The Colonial Pipeline, which supplies 45% of fuel used on the East Coast, was shut down by hackers six days ago. Analysts say there’s no need to panic-buy. pic.twitter.com/iQBKvv8zRF

Energy Secretary Jennifer Granholm has asked Americans not to hoard gas as the pipeline attempts to resume normal operations by the end of the week.

“Let me emphasize that much as there was no cause for say, hoarding toilet paper at the beginning of the pandemic, there should be no cause for hoarding gasoline, especially in light of the fact that the pipeline should be substantially operational by the end of this week and over the weekend.”

Unfortunately, it doesn’t seem like people are listening to government officials as videos and pictures of consumers hoarding gas have popped up on social media.

Gas lines all the way down to the expressway. pic.twitter.com/D38kfpABuj

What kind of plastic bag is best for storing gasoline? Asking on behalf of a brain dead nation…..#GasShortage2021 pic.twitter.com/cBwoTafAov

No need to wonder why there's a #gasshortage on the east coast. Ole buddy had eight containers lined up at the Murphy across from Tanger 17 in Myrtle Beach. pic.twitter.com/RYBFLlQRyn