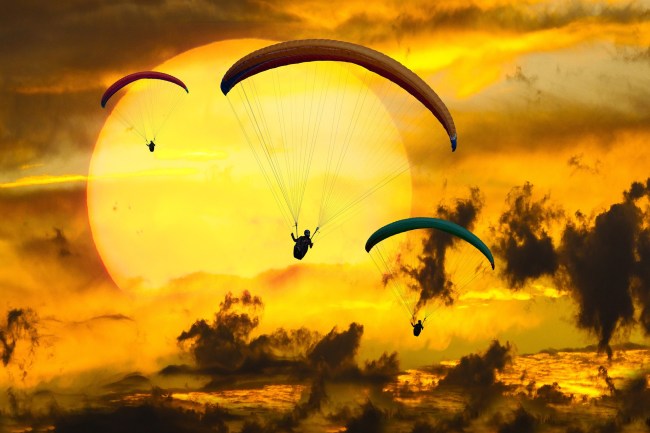 Hasan Kaval is 29-year-old a paragliding instructor from Izmir, Turkey who apparently moonlights as a daredevil. How he doesn’t already have a million YouTube subscribers is beyond me if he’s pumping out footage like this.

This dude attached a couch and a TV rig to his paraglider. The finished setup allows him to cruise hundreds/thousands of feet through the sky over the Bosphorus Sea in Turkey while watching television or whatever it is he chooses to watch based on his smart TV setup.

The setup alone is insane but then he takes it a step further by not even including a safety harness. This man is straight chilling on the couch and eating chips on the couch and watching while soaring through the air on a paraglider. All of this is kind of hard to wrap your mind around until you really see it in action.

He manages to take off and land safely, later saying ‘I wasn’t scared, my friends trusted me. It was fine.’ The dude is straight-up lounging in the air up there:

I have to respect this dude’s hustle. Did he need to add the customized lamp and footstool? Probably not. But spending his time holed up at home building this absurd contraption is a whole lot more work than many of us have done in the past few months. Do you know what I’ve done over the past several months? Not a whole lot other than work, to be honest.

Just making it through each week intact has been enough for me to feel satisfied. My 15-month-old toddler’s been home from daycare for 110 days straight, not that I’m keeping track, and juggling full-time parenting with full-time work, all of this just months after my mom passed away suddenly in January. Making it to the weekend is enough for me. But I respect this guy’s hustle in using his time stuck at home to build this outrageously awesome contraption. It almost has me motivated to get out there and build something myself, almost.