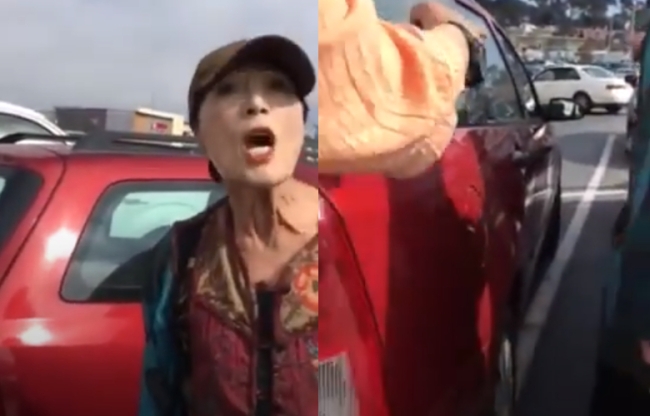 Another day, another Karen going berzerk. This frenzied meltdown is definitely one for the ages. In the parking lot of a Home Depot, a raging woman goes on a completely unhinged rant. The tempestuous woman berates the man throughout the two-minute video, even claiming that he purchased a large SUV to compensate for a small penis. The one problem: the woman is the one who terribly parked her car, which caused all of the issues to begin with. The video features some extremely salty language by the parking lot Karen.

The video starts out with a woman yelling, “I can’t open my fucking car. My daughter has to get it in. He won’t move his car.” The man recording the video is also the owner of the SUV in the middle of this unnecessary drama. He laughs off the ferocious diatribe.

“Move it,” the woman shrieks during the public freakout. “You parked it too fucking close!”

The man is so completely perplexed by the falsified claims that he is unable to speak.

The man asks the furious woman’s daughter if her mother is okay. Then he proceeds to expose the woman’s lie. His black SUV is parked in between the lines of the parking space. Meanwhile, the angry woman’s red Ford Focus is over the line and is the actual cause of the vehicles being so close in proximity.

An onlooker attempts to calm the crazed woman down and point out that her car is poorly parked, “You have a lot of space there.” But she also gets upset with him.

The man recording talks to the bystander in Spanish, and calls the woman “crazy.”

The parking lot Karen then marches toward the man and screams, “Fuck you! Fuck you! Don’t call women ‘crazy!’ Fucker!”

“Look, you little shit,” she screams at the man. “You fucking old bitch. Driving a car like that, asshole.”

Suddenly, seeming like a different person, the woman calmly says, “You’re not happy, man.” Then her demoniacal personality returns in an instant, and she yells, “You’re an old fart!”

“You’re too old to be driving a car like that, it’s too big for you,” the woman who couldn’t park her car in the parking space says. “Pecker! You drive like it, you little tiny pecker.”

“That is your dick isn’t it,” she references his SUV, hinting that the gentleman is compensating for not being well-endowed by driving a truck. “You’re proud of your old fucking dick, but it’s your car not you. Yeah, can’t get it up. Viagra my ass. You stupid shit.”

The parking lot Karen leaves with one final pearl of wisdom: “Park that shit correctly!”

“I’m in disbelief,” the man says right before the video concludes.

Oddly, the woman throws the temper tantrum that her daughter can’t get into the vehicle because the cars are parked too close. Yet … after the argument, they both walk away and appear to be heading to the Home Depot.

Please, for your own safety, I beg of you to steer clear of any Karens you may see in a parking lot. Employ extreme caution in parking lots of shopping plazas that have Marshalls, Home Goods, T.J.Maxx, or a Kohls.