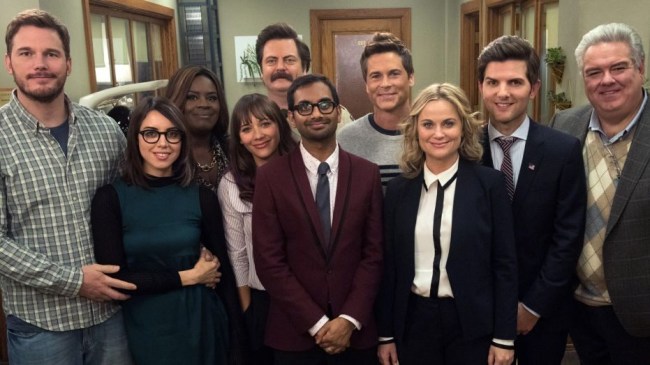 Anytime Parks and Rec or The Office is a topic of one of my articles, I feel inclined to mention that I enjoy the former more than the latter. To be clear, it’s not as though I think Parks and Rec is better, per se, I just happen to prefer its lighthearted, generally kind brand of comedy as opposed to the more meanspirited cringe humor of The Office. To each his own, as they say.

But whether you’re a Michael Scott stan or a Ron Swanson fan, the news that the Parks and Rec cast is teaming up for a half-hour scripted special reunion next week is good news to everyone.

According to reports, the entire cast of the beloved Pawnee-set sitcom will be returning for a half-hour scripted special to raise money for Feeding America’s Response Fund. The Parks and Rec special is currently set to air on NBC on Thursday, April 30th at 8:30.

All of the show’s core cast — Poehler, Rashida Jones, Aziz Ansari, Nick Offerman, Aubrey Plaza, Chris Pratt, Adam Scott, Rob Lowe, Jim O’Heir and Retta — will return for the special. NBC says some other familiar faces from Pawnee may return as well. Co-creator Mike Schur and several Parks writers collaborated on the show. (Watch Poehler announce the special in the video, below.)

The special will raise money for Feeding America’s Response Fund, which helps food banks secure the resources they need to serve the most vulnerable members of their communities. Sponsors State Farm and Subaru will each make matching donations of $150,000, and combined with NBCUniversal and the cast and producers of Parks and Recreation, a total of $500,000 in matching donations will be made through May 21. [via The Hollywood Reporter]

While it’s a shame that it’s happening under these circumstances, I’ll take more Parks and Rec in my life any way they’ll give it to me.

RELATED: An Interview With Nick Offerman: Is Green Beer Ever Acceptable? Who Will Win ‘The Bachelor’? How Do You Give The Perfect Toast?