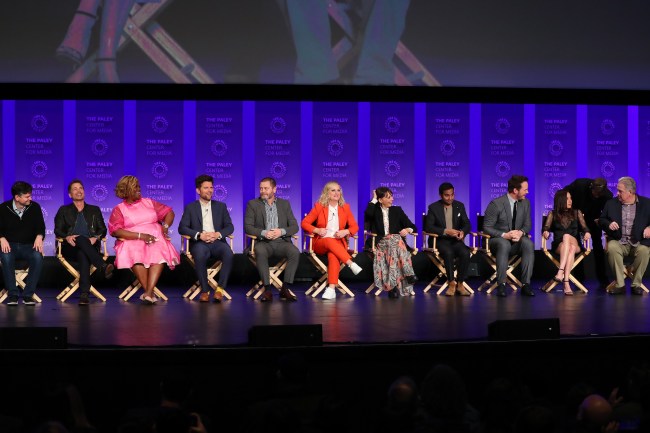 The Parks and Recreation finale back in 2015 was bittersweet. On the one hand, that show’s final season and finale were infinitely better than 99.99% of TV comedies over the past few decades. They ended the show extremely well and as a fan, you had to respect that. On the other hand, the show’s finale left a big black hole in Thursday night programming.

With any show that’s been incredibly successful like Parks and Rec, The Office, Seinfeld, etc., there is always a discussion about reunions. It’s even more common in the age of Netflix where they’ve revived shows like Arrested Development, and ABC brought back Roseanne.

Now’s the time to talk about a Parks and Rec reunion because the entire cast, even the super duper ridiculously famous ones like Chriss Pratt, reunited at Pally Fest where they talked about their favorite memories from filming the show and the potential of a Parks and Recreation movie. Spoiler alert: the movie doesn’t seem likely unless someone puts a genius script onto a paper.

Here are all of the highlights from the Parks and Recreation reunion at Paley Fest via Twitter‘s Moments:

Even Perd Hapley was there!

Donna rockin’ a ‘Treat Yo Self’ dress is definitely a nod to the fans and I love it.

WE HAVE SO MANY FEELINGS RIGHT NOW!! 🥰😂🥰😂@parksandrecnbc #PaleyFest pic.twitter.com/VjGcpLKCTT

Now for the commentary about the cast and crew’s favorite moments, scenes, memories, and the future:

Mike Schur says the design of @parksandrecnbc with sincerity was hard to do because it’s the opposite of cool. Schur learned it working w/Greg Daniels on #TheOffice. Schur says the saddest day on the show was when Chris & Ann left Pawnee because Amy & Rashida are good friends IRL

Amy and Rashida on Leslie and Ann: Rashida says she loved how much Leslie bolstered Ann as a human being — they weren’t catty, they supported each other. #PaleyFest @parksandrecnbc

Amy Poehler thinks they had a lot of freedom to play and they also brought a lot of themselves to #ParksandRec #PaleyFest pic.twitter.com/kLESupDCRG

TV needs more of this:

The cast did “fun runs” which were takes where they could do anything. The show was shot with 2 cameras. The last 5 minutes of a scene was when they could do whatever they want. @parksandrecnbc #PaleyFest pic.twitter.com/2XqOPYdxjc

Mike Schur, the show’s creator, often recalls this as one of his favorite Parks and Rec moments.

Mike Schur recalls Chris Pratt making a joke when Leslie has the flu and Pratt improvised “hey Leslie, I typed your symptoms into the computer and you might have a network connectivity problem” @parksandrecnbc #PaleyFest pic.twitter.com/S3MXqe21FX

I need to know who this real person is and where to find them.

Nick Offerman says they found a libertarian city official who was the impetus for Ron Swanson’s anti-govt stance. Mike Schur says the Venn diagram of Leslie and Ron is an overlapping circle. Ron Swanson became a woodworker after the writers saw Nick’s home workshop. #Paleyfest

These would easily sell for $100K on eBay.

Mike Schur says Nick Offerman salvaged the doors from the @parksandrecnbc set and made everyone canoe paddles with the Pawnee seal on them. #PaleyFest pic.twitter.com/z2Jfg1ZW1E

Is there an aspect of your character that you carried into your life? @roblowe says “i think i’m gonna live til I’m 150” — Retta says “Treat Yo Self” and that friendships are bery important to her. #PaleyFest pic.twitter.com/5Sil0X2Jpz

Didn’t everyone get heavily into Game of Thrones around this time?

Adam Scott says he got very into #GOT after Ben did. Nick Offerman says he cleaned up his diet and “gave in to the power of Tammy 2” (Nick’s real life wife Megan Mullally!) #PaleyFest #parksandrec

.@prattprattpratt says his relationship with the FBI is LEGIT after #parksandrec after his days as Bert Macklin! Pratt says he learned the value of freshness, making takes different. It catered to his strengths. #PaleyFest pic.twitter.com/uScEeyCEG5

Chris Pratt recalls five years before he got “Jurassic World” and he did a bit as Andy where his cell went off and he joked “It’s Steven Spielberg. I’ll have to get back to him about Jurassic Park 4 — and 5 years later…” #PaleyFest pic.twitter.com/Wadd29Wzl4

.@evilhag Aubrey Plaza says she carries the dark arts with her and April’s philosophy that nothing matters an we’re all gonna die so who cares? #PaleyFest #parksandrec

About phrases like #TreatYoSelf and #GalentinesDay that have become part of the vernacular, Rob Lowe was so happy when “literally” became his buzzword. pic.twitter.com/1viUBb0qa7

.@roblowe says Mike gave him a wrap gift of the notes Mike took after meeting with Rob for the show – and one phrase was “He says ‘literally’ all the time” #Paleyfest @parksandrecnbc

.@pattonoswalt points out the show called the 2016 election. How do they feel about that? Amy Poehler says “if only we had Bobby Newport now…” #PaleyFest pic.twitter.com/rLqOXj95tY

Hate to hear this. Someone needs to whip up some magic.

.@pattonoswalt suggests making a #ParksAndRec movie. Mile Schur says “I think everyone on this stage would want to feel there’s a story to be told. The show was about the power of public service & doing good with a team. I don’t think we left anything on the table.” #PaleyFest

Just a quick reminder that Parks and Recreation is on Netflix and you can binge watch it all day every day and at night. My advice is to always skip the first season because Mark Brendanawicz was one of the biggest and wettest blankets in TV history and brings the entire season down. The show didn’t get good until he left and Adam Scott showed up as Leslie’s love interest with Rob Lowe as his sidekick.