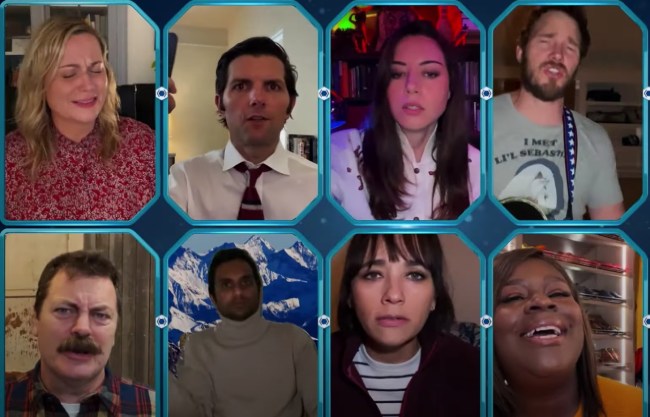 The cast of Parks and Recreation reunited last night in a special one-time episode to raise money for Feeding America. The Parks and Rec reunion was so good that I felt compelled to make a donation myself.

I don’t think anyone expected to see the Parks and Recreation reunion open up with the character Bobby Newport played by Paul Rudd but it played out perfectly. His character was always completely oblivious to the outside world and it was a perfect lede into how much everything’s changed in the past two months across the globe.

The premise of the reunion episode was sent in real-time. Leslie Knope had created a calling tree with her former Pawnee coworkers where each of them would call one another each night to check on their mental and physical health. There were callbacks to previous episodes like Leslie’s husband Ben Wyatt slipping into a state of depression and combining his claymation project with the Cones of Dunshire. Mayor Jerry Gergich couldn’t figure out how to work Zoom. Andy Dwyer was stuck in the basement like the buffoon that he is.

Li’l Sebastian, may he rest in peace, was honored in the episode’s culminating musical number where the entire cast got together on a group call to sing Mouse Rat’s ‘5,000 Candles in the Wind’, a song most people know as ‘Bye Bye Li’l Sebastian’. This is what you came here to see and it was fantastic but I’ve also got plenty of other highlights from the episode below:

The entire episode worked out perfectly because the case of Parks and Rec were always more than just coworkers, they became lifelong friends on that show and treat each other like family. You can see them talk about this in countless interviews or you can watch the reunion episode and see how easy it was for everyone to slip back into character just like it was yesterday and not 5+ years ago.

Here are some more highlights from the Parks and Recreation reunion episode:

“A Parks and Recreation Special” is nearly here. 🤩 Who are you watching with tonight? pic.twitter.com/ojLRmW6RQS

You thought we would come back without Bobby Newport? Knope. 😉 Together with @StateFarm and @subaru_usa, we're helping raise money for @FeedingAmerica. 🌳❤️ Join us! https://t.co/YuyWBTYmrH https://t.co/qCH44VCwsx

After all they've been through, Leslie and Ron will always take care of each other. Together with @StateFarm and @subaru_usa, we're helping raise money for @FeedingAmerica. 🌳❤️ Join us! https://t.co/YuyWBTYmrH https://t.co/oWSu0S3vh3

I love that Chris Pratt is wearing an "I Met Li'l Sebastian" shirt under Andy's Johnny Karate costume #ParksAndRec pic.twitter.com/IwBQOHvT1g

It would’ve been weird if Nick’s real wife Megan Mulally who played his ex-wife Tammy on the show didn’t make an appearance since they are locked up together and her cameo was excellent.

If you haven’t watched the reunion episode yet you can find it streaming online. If you were a fan of the show, and I assume you were/are if you’re reading this article, I think you’ll find that the Parks and Rec reunion exceeded everyone’s expectations.