Woman Wears All Of Her Clothes To Avoid Paying Baggage Fees, Heralded As Travel Genius For Viral Photo 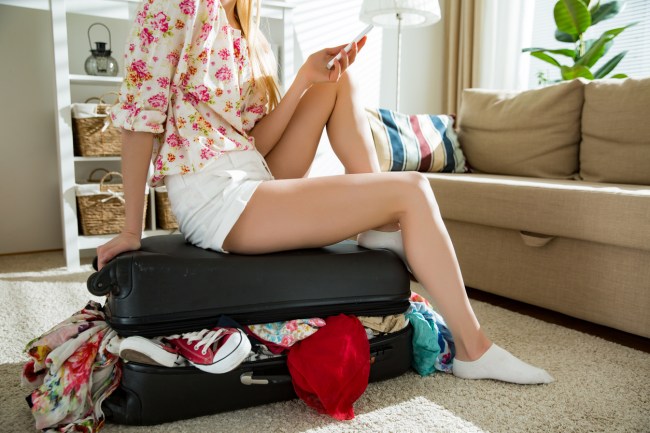 We’ve all been there, that moment of truth when you put your suitcase on the scale at the airport check-in. You know you’re close to being over the maximum weight, but you felt the need to bring two pairs of hiking boots to your trip to Costa Rica. The airline clerk informs you are over the weight by one pound, so you scramble to tear open your luggage and extract enough contents to get down to the weight that won’t force you to pay the $50 overweight surcharge. One flyer went to extremes to cut weight from her baggage.

Gel Rodriguez from Davao City in the Philippines cut weight better than a veteran fighter before a critical bout. The airline clerk informed Gel that her luggage weighed 19 pounds, five pounds more than the allowed weight.

Rodriguez then emptied her luggage and put on five pounds of clothes to get her luggage down to 14 pounds to avoid any extra fees. Gel posted the photo of her new outfit that she had to fly in on Facebook.

Rodriguez is seen wearing at least eight tops and jackets, three pairs of pants. One of the things that were weighing down her luggage was a pair of wet pants. She wore them on the flight. “I wore my wet pants (the main reason of my excess),” she said. “They had my bag weighed again and it was already below the maximum required [for] hand carry.”

Gel’s Facebook photo with the hashtag “#ExcessBaggageChallengeAccepted” went viral with more than 35,000 Likes and over 21,000 Shares. The unusual, yet innovative solution was being deemed as the greatest travel tip by commenters.

Rodriguez admitted that “it was really hot” to travel in all of those layers on the Thomas Cook flight. But she did save herself from an excess baggage charge. This is all fun and games until TSA asks to search her because she has so much clothing on.