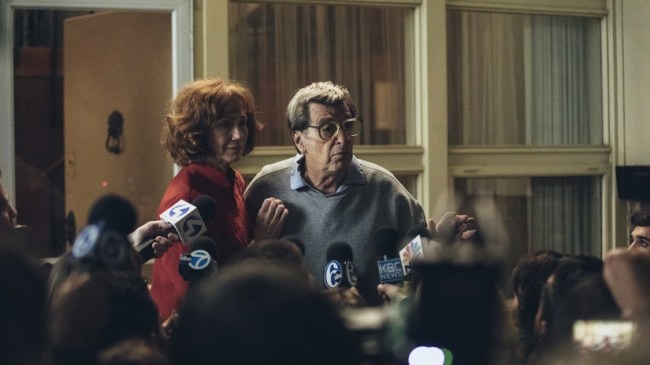 The first trailer for HBO’s movie titled “Paterno” has been released and it features Al Pacino having to answer a tough question. Academy Award-winning Al Pacino plays former Penn State football head coach Joe Paterno as he finds himself taking heat over the Jerry Sandusky scandal. The upcoming HBO movie focuses on how Paterno dealt with the scrutiny after the news was revealed that his longtime assistant coach was accused of multiple incidents of child abuse and molestation. In the trailer, Paterno is asked a tough question by one of his sons, “Dad, did you know about Jerry?”

“Paterno is not a sprawling piece that spans years,” said Barry Levinson, the film’s director. “It unfolds largely over a two-week period, when we watch the events play out. I’m not following an agenda or trying to tell the audience to take a certain side in regards to Coach Paterno. The film lays out the elements of the story and leaves you to make your own judgment. There are times when you may feel one way, and times when you may feel a totally different way, and I think that’s what makes the piece so compelling.”

The movie begins after news of the Sandusky indictment was released. Sandusky was an assistant coach under Paterno from 1969 until he retired in 1999. Ultimately, Sandusky was found guilty of 45 counts of child sexual abuse in June 2012. On October 9, 2012, the disgraced Penn State assistant coach was sentenced to 60 years in prison and he will not be eligible for parole until he serves at least 30 years. At the age of 73-years-old, Sandusky basically received a life sentence. Paterno, the movie, is set to release this spring.