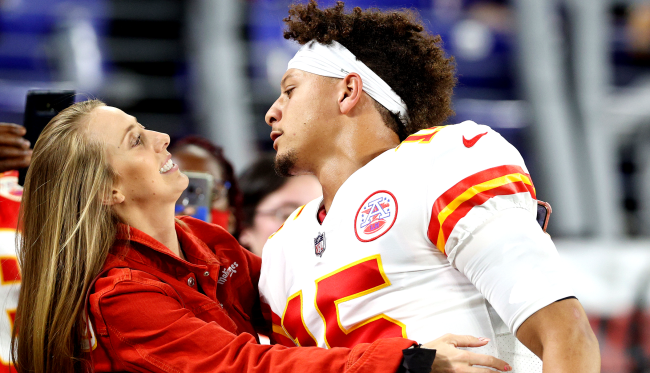 Patrick Mahomes’ family is the most insufferable group of fans in sports. It used to be the Ball family, but Lavar has toned things down a lot, while Mahomes’ fiancée Brittany Matthews has dialed it up to 11.

Not a week in the NFL season goes by that she or someone else in the Mahomes family doesn’t do something that annoys people. (Looking at you Jackson Mahomes.)

Last week, after the Chiefs’ insane victory over the Bills in the NFL divisional round, Brittany Matthews once again caught the ire of football fans when she took it upon herself to spray a bottle of champagne on the fans below her suite.

A lot of fans thought Matthews was being very inconsiderate considering most people don’t want to be soaked on a freezing cold day and reek of champagne as they sit in their car waiting to get out of the parking lot.

Matthews’ response? “I just wish I could do what I want without getting attacked every week,” she tweeted.

That too, did not go over well.

How come all the other wives and girlfriends of Chiefs players weren’t spraying champagne ?

So, in response to the fans’ response to her response, Brittany Matthews is now selling t-shirts that say “Team Brittany” on them.

Proceeds from the “Team Brittany” t-shirt sales are supposed to go to an anti-bullying charity, according to the manufacturer.

But seriously…leave Brittany alone. We’re teaming up with @brittanylynne8 & #RedCardKC, an organization founded in KC between @SportingKC & @ChildrensMercy in effort to call out bullying when you see it. Proceeds will benefit #RedCardKC! #TeamBrittany https://t.co/OmXFscJ2kw pic.twitter.com/ybS4oSvPm9

I will be personally matching the donation made to Red Card KC🙏🏼❤️ I appreciate the KC Community! 🙌🏼 https://t.co/tkPePzstef

“Me and my team have decided to try to turn this buzz into something and something good for the Kansas City community,” Matthews said on Instagram.

“We have decided that part of the proceeds from the sales of this shirt are gonna go to Red Card KC which is a local charity here in Kansas City that works to prevent bullying,” she continued.

“Obviously, I do receive a lot of hate on a daily basis on social media and I know so so so many other people do as well,” she went on.

“That’s why I’m just proud to partner with this company and get behind this cause and hopefully push everything into the right direction and start spreading some more positivity on all of these platforms.”

Response to Matthews’ “Team Brittany” shirt idea were, well, they were pretty predictable.

Wow! T-shirts’ actually printed with this???? How embarrassing & hilarious at the same time 😂

You tweet and attack others always. You called someone a jackass the other day🤔and have bullied people too. #bebetter #holdyourselfaccountable #itsnotalwaysALLaboutyou😑

So you can trash talk all game long and bash other opposing players but when people call you out then you're the victim and you need your own shirt?

Your husband will be matching the donation you mean?