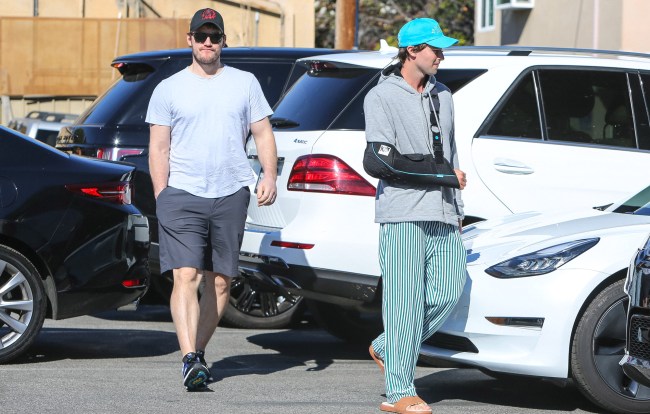 While the rest of the world moved on about 8 seconds after it happened (if they even noticed to begin with), Chris Pratt’s friends are apparently still upset, weeks later, that their buddy was ranked as the “Worst Chris” by fans.

To recap, someone did one of those “one of these have to go” Twitter things with four pictures, this time with the four famous actors around the same age named Chris: Pine, Hemsworth, Pratt and Evans.

One has to go. pic.twitter.com/HUWnbQOA43

Many, perhaps even a majority of people who participated (I didn’t count), chose Pratt.

This would not stand with Pratt’s pals Zoe Saldana, Mark Ruffalo, Pratt’s wife Katherine Schwarzenegger, and Robert Downey Jr., who wrote a ridiculously over the top Instagram post suggesting that if anyone has a problem with Chris Pratt they should delete their social media accounts. Seriously, he wrote that.

Of note, RDJ loves him some Chris Pratt so much that he edited Tom Holland out of the photo he used to defend the Guardians of the Galaxy actor.

Fast forward a few weeks to this past weekend and in an interview with Variety, Pratt’s brother-in-law Patrick Schwarzenegger once again took up the fight for his beleaguered pal.

“It’s crazy. Twitter is a junkyard, right?” said Schwarzenegger. “I mean, every day there’s something. People are calling out this person or that person, or let’s get mad at this person. People are so focused on putting other people down to make themselves feel better. It’s sad, honestly.

“Chris is pretty strong-boned. I don’t think anything really hits him deep down. I messaged him, and just mostly was like, ‘I hope you’re not taking this seriously.’

“I don’t really know what else to say. I think he can learn a thing or two from my dad or my mom. My dad was always adamant about not letting anybody else’s opinions mess with his drive or where he wanted to go. No matter what you’re doing in life, there’s are always going be people hating on you and wanting you to fail.”

Really? This stupid little tweet was important enough for Schwarzenegger to message Pratt to discuss it? Talk about fraglie egos.

Schwarzenegger added, in a massive bit of irony, “There’s always two ways to focus on anything in life: the positive and the negative. People that focus on the negative, it shows more about them as a person.”

Here’s an idea. Do you know what would probably help poor Chris Pratt get over being called the “Worst Chris” by fans? If his friends would stop talking about it.