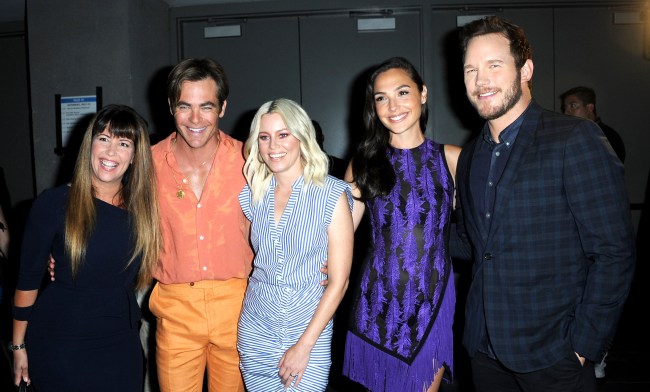 People are upset with Chris Pratt again. To recap, for awhile fans were mad at the reason Pratt refuses to take selfies. Vegans don’t like him because he once posted a photo of some lamb meat on social media. Then he went on some strange diet that sounded incredibly unsafe. Jason Momoa got fans angry at Pratt when he called him out for holding a bottle of water in an ad. And then there’s the whole thing about his church being anti-LGBTQ and some the list goes on and on because people love to find things to be outraged about.

This time the reason people are upset with Chris Pratt goes back a few days to when he was basically “voted” the worst “Chris” in Hollywood by people on Twitter.

One has to go. pic.twitter.com/HUWnbQOA43

Apparently it was, at least to several of Chris Pratt’s Marvel buddies.

No matter how hard it gets, stick your chest out, keep your head up and handle it.
-Tupac
You got this @prattprattpratt . Your family, friends, colleagues & everyone who’s ever crossed paths with you knows your heart and your worth!

You all, @prattprattpratt is as solid a man there is. I know him personally, and instead of casting aspersions, look at how he lives his life. He is just not overtly political as a rule. This is a distraction. Let’s keep our eyes on the prize, friends. We are so close now.

Robert Downey went super deep defending his Marvel pal on Instagram, writing, “What a world… The “sinless” are casting stones at my #brother, Chris Pratt… A real #Christian who lives by #principle, has never demonstrated anything but #positivity and #gratitude… AND he just married into a family that makes space for civil discourse and (just plain fact) INSISTS on service as the highest value.

“If you take issue with Chris,,, I’ve got a novel idea. Delete your social media accounts, sit with your OWN defects of #character, work on THEM, then celebrate your humanness… @prattprattpratt I #gotyerbackbackback.”

Pratt’s wife Katherine Schwarzenegger even chimed in, writing, “Is this really what we need? There’s so much going on in the world, and people struggling in so many ways. Being mean is so yesterday. There’s enough room to love all these guys. Love is what we all need, not meanness and bullying. Let’s try that.”

That… is a lot of very vocal defending of a guy who basically just lost a game of Marry, F***, Kill.

Which led to fans being quick to point out just how overboard it all was.

the Chris Pratt discourse about a POLL could’ve been a joke. they act like he’s dying or his career really hurting over not being the most liked Chris. are we in an alternate universe?

You guys act like Chris Pratt was beaten, shot unjustly, been told he can’t marry the person he loved, had his child taken from him or something...

The second hand embarrassment of knowing there was a coordinated effort sent through email or group text asking Chris Pratt’s coworkers to defend him.

Where was this energy when Brie Larson was massively harassed for months just for advocating for diversity in the industry? And they all knew about it. Suddenly Chris Pratt gets some criticism and they all come to his defense? The bar is hell. pic.twitter.com/4mmlfxFkig

The other Chris’s watching the Chris Pratt drama pic.twitter.com/JqwaeVniTg

I’d like to trade Pratt for Farley, TBH. pic.twitter.com/SJPHRQ3bsl