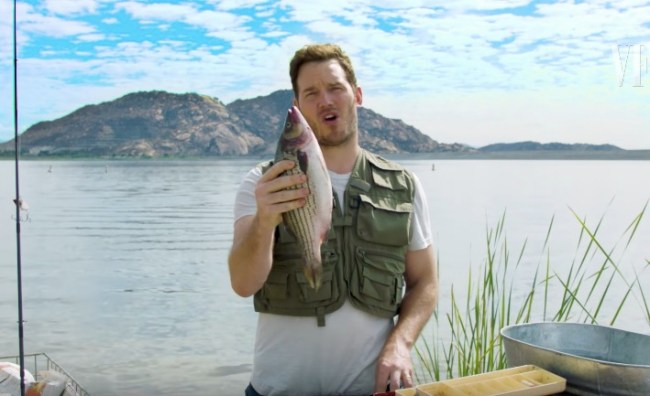 Vegans and vegetarians are insanely enraged over a photo of lamb meat that Chris Pratt posted on his Instagram. The usually beloved star of Guardians of the Galaxy saw his fans morph into an angry internet mob clutching their pitchforks and torches because of an Instagram pic. The Star-Lord posted a photo of the beautiful finished product of one of his own lambs that was cleaned up and butchered. The internet responded with calm and calculated comments. Just kidding, vegans lost their shit and spiraled into an insanely bombastic rage (maybe vegans won’t be so grumpy all of the time if they enjoyed some succulent and delicious meat once in awhile). So much more outrage over people eating meat than people eating a Tide laundry pod.

Pratt posted a photo of the lamb meat and explained that he raised the wonderful creature on his farm and the entire carcass would be used for food for his family and friends and its wool would be made into yarn. The amiable actor posted this caption with the photo:

Look at all this glorious food! We will eat off him for a month. His wool is becoming yarn as we speak. He lived a very good life. He was groomed and shorn, his hooves medicated, de wormed, no antibiotics necessary. Surrounded by laughing loving humans, including children to whom they provided such joy. Nuzzled, pet and loved every day. No stressful travel to his final destination. Trauma Free. Just a touch of a usda certified wand to his head and he goes to sleep. The other sheep don’t even notice. It’s like unplugging a tv. Then Wocka my butcher works his magic. Right now the meat is for friends, family and gifts. Soon though it may be available to my followers as we test recipes and open up to market. Gotta get some things dialed in first. I have found a new passion to add to my many others. #farmlife and jack loves it! You’ll know where to sprinkle my ashes. I’ll tell you that.

To be very honest, those cuts of meat look absolutely magnificent and delicious. Vegans and vegetarians were triggered and instantly pounced on the Instagram post. They even made absurdly hyperbolic comparisons of the killing of the one lamb to the Holocaust. The post was to emphasize how wonderful of a life the lamb had on Pratt’s farm and how the animal’s life did not go for naught because all of the lamb was being utilized and not wasted. Many users threatened to unfollow Pratt for the Instagram photo, while others voiced their opinion on what Chris Pratt should eat for dinner. “Too much money up your ass, no more room for human decency a d compassion,” one Instagram users said. “It takes a truly sick individual to look at a life & death as ‘unplugging a tv,'” another person commented. Nobody is calling out the dinosaurs that tried to eat Chris Pratt.

Pratt was making the point that the animal was not from some factory farm living in a tiny cage. But rather it was adored by children and lived a wonderful existence before being butchered for his family’s food. Vegans must not have loved this video of Chris Pratt giving a tutorial on how to clean and gut a fish.

Hey vegans, I hope you enjoy surviving off of water and air because a breakthrough study found that plants can sense the world. Think about the plants’ feelings before you kill and chomp down on an innocent kale leaf or spiroulina. Chris Pratt should stick to his guns and take the advice of Ron Swanson from Parks and Rec.