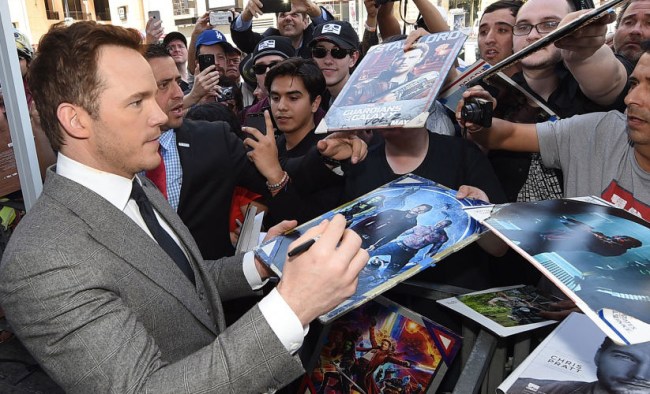 Chris Pratt, on the surface, seems like a pretty down-to-earth guy, but don’t try to take a selfie with him because he isn’t having it.

Now this isn’t the first time we’ve heard about celebrities refusing to take selfies with fans. Emma Watson admitted awhile back that she won’t do it because she’s afraid her many stalkers will then be able to pinpoint her location. That I totally get.

Justin Bieber quit doing it at one point, but his reason was basically just because he was being a whiny little baby, AKA being The Biebs.

Pratt’s reasoning for not taking selfies with fans, however, comes off a little bit annoying for a guy who went from living out of his car to mega-superstar.

Speaking in the May/June 2017 issue of Cigar Aficionado magazine, Pratt had this to say…

“I’ve always been a pretty deferential, go-with-the-flow guy. But now I have to be economical with my time. If I go out and want to do normal things, I have to be comfortable disappointing people. I just don’t take pictures with people. Because that’s not about enjoying the moment; it’s about stealing the moment to brag about later. So, I say, ‘Would you settle for a handshake?’ And then they take the picture anyway.”

Hey Chris, if you want to be able to go out and do normal things then maybe you and I should switch jobs. I’d trade having to take selfies with fans for your income and perks.

He also discussed how he misses interacting with us regular folk…

“It’s tough sometimes, the amount of management you need to do on things you used to do spontaneously. What I really miss is sitting down and talking to strangers who don’t know me, so we can discover each other. I’d say the majority of people I meet have an idea about me before they meet me. There’s something nice to being able to surprise somebody.”

As far as being famous is concerned here’s when he realized that he had “made it.”

“There was this moment when I was at a party and Barbra Streisand and Jim Carrey both came up to me to tell me they loved what I’d done. Streisand asked me, ‘How does it feel? You’re this year’s big thing.’ Jim Carrey told me the same thing. That was when those people stopped being my icons and became my peers.”

But don’t call him a diva…

“The Brits are so polite. There I am, smoking these little cigars on the set and it is, in fact, illegal. But they were so reluctant to finally say, ‘I’m very sorry, but I’m afraid it’s against the law.’ And I said, ‘No, no, that’s cool—just tell me when the cops come.’ Hey, I show up on time, I know my stuff. It’s like, my one diva thing.”

His one diva thing. Why do I somehow not believe that?