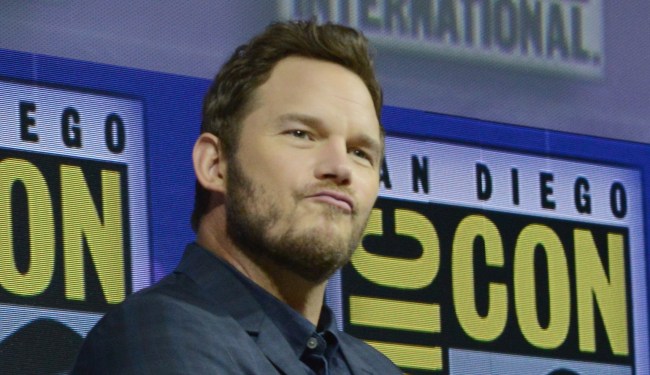 Apparently Chris Pratt didn’t appreciate all the love he got awhile back from the internet for slipping back into his dad bod after getting ripped for Guardians of the Galaxy.

No, seriously, women (and men) were falling all over themselves when they saw him rocking a dad bod this winter.

I hope yall know that Chris Pratt got his dad-bod back 😍 so it’s over for all other men in 2019; I don’t make the rules

@prattprattpratt Gimme all of dat dad bod you are so fucking sexy 👅👅👅 pic.twitter.com/oFpq0eR7Nx

See what I mean?

Too bad for them though, because Pratt recently announced on his Instagram account that he is currently partaking in some weird diet called the “Daniel Fast” inspired by The Bible.

“Hi, Chris Pratt here. Day Three of the Daniel Fast, check it out,” Pratt said in a recent Instagram video. “It’s 21 days of prayer and fasting.” Then he added, “It’s going to coincide also, coincidentally, with the Lego Movie 2 junket. So, by the time you see me, I’ll probably be hallucinating. Stay tuned.”

According to a website on the Daniel Fast, “It’s a biblically based partial fast based on two accounts of the Prophet Daniel’s fasting experiences (seed Daniel 1 and 10) and typical Jewish fasting principles. The Daniel Fast eating plan is similar to a vegan diet with additional restrictions.”

That… doesn’t sound crazy at all.

Hmmm… get this… Liz Weinandy, a dietician at the Ohio State University Wexner Medical Center, says the Daniel Fast is “risky.” Go figure.

“It’s really not a good idea to do,” Weinandy told Men’s Health in a phone interview Friday.

The diet, she said, is lacking in “all kinds of nutrients,” including proteins and essential fat, and could potentially lead to dangerous deficiencies, including hypnoatremia. And while Weinandy said she is a proponent of intermittent fasting for periods of 12 to 14 hours—which she said can carry numerous health benefits—she is concerned about the lengthy duration of the Daniel Fast.

“People need to get back to balance and moderation,” she said. “Anything that is ongoing and looks like it’s extreme, usually is.”

If only there were someone, anyone, say an older man he knows with loads of experience in the world of fitness, health and nutrition that could throw Chris Pratt a little advice.

Want to learn some less “risky” ways to get and stay fit? Peep these workouts and diet plans that several other famous people follow…