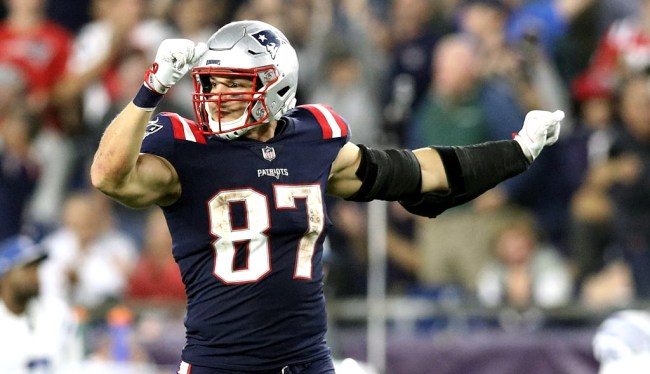 The interesting thing about it was the fact that Kostek said, “When I workout alone, as opposed to with Rob, I’m so much more motivated. His work ethic is super strong. His endurance exceeds mine so it sets the standard really high…I don’t want to move on to the next workout until I can get at least half the speed or one rep that is the speed he was at.”

Coincidentally, Gronk recently sat down with Men’s Journal and shared a bit of what goes into his NFL workout and diet plan.

How do you train and get yourself ready for the NFL season?
Rob Gronkowski: In the offseason, it’s about taking care of your body the correct way, working out and eating right. During the season, it’s extremely important to make sure you’re getting the treatments you need to recover for the next day, and getting the proper rest and sleep so you can bounce back stronger. Eating the right way is so important, too. I always make sure I’m putting the nutrition in my body that will help keep me fueled and energized when I get on the field.

What are some of your favorite exercises and workouts to do?
I love doing resistance workouts, especially with resistance bands. I feel like they just help me out big time, keep me loose, keep my body strong, and keep me moving quick. I feel like those workouts are just the best for my body of anything that I do. When I’m working on speed and my quickness, I’ll train my fast twitch muscles, making sure I’m going in all different directions and not just straight back-and-forward. I make sure I’m doing lateral motions side-to-side and doing it quickly. Working on those muscles helps me stay active on the field and helps with my speed a lot.

I mean, I love doing just bodyweight type workouts, just a lot of high reps of those. It’s great to have a gym, but if you don’t have access to anywhere at the moment, I believe you can just get a full workout in just using your body or whatever’s out there in nature for weights. A log, a big rock, whatever you have. I like doing a lot of body squats, and you can come up with many, many exercises just using your body.

Gronkowski also discussed some of what goes into his diet, saying, “I like to make sure that I get my veggies and fruits in every single day. No matter what I’m eating, I make sure to get that stuff in somehow. Whether it’s veggies in the juice I’m drinking, or some vegetables or fruit on the side of my dish, I always get those in on every meal.”

Not that he doesn’t appreciate some good junk food. When asked what is the one type of snack he would recommend putting out when having some people over to watch football, he responded, “You have to have some guacamole and chips no matter what. You have to have those good snacks. Without the good snacks and the good drinks, it’s really no party at all.”

During the interview, Gronk also discussed what playing with Tom Brady is like, his travels around the world, competing with Michael B. Jordan for charity, and who would be on his ultimate dinner party guest list (Dwayne “The Rock” Johnson and NBA GOAT Michael Jordan made the list).

Read the entire piece over at MensJournal.com.