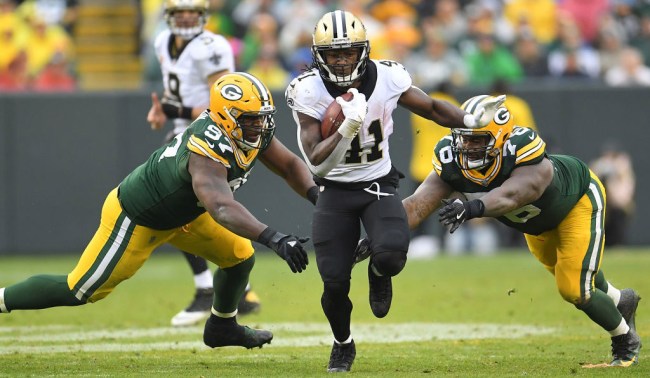 New Orleans Saints running back Alvin Kamara had such an amazing rookie year that, amazingly, he made one of the best running backs in NFL history, Adrian Peterson, expendable.

After putting up 728 rushing yards (with an eye-popping 6.1 yards per carry) and catching 81 passes for 826 yards (the most of any running back) Kamara was named to the Pro Bowl and received the NFL Offensive Rookie of the Year award.

So it’s obvious that the 5-foot-10, 215 pound back from Norcross, Georgia is a remarkable athletic specimen. However, his offseason training regimen reveals just how much of an athletic beast Kamara really is.

Apparently, part of Kamara’s workout program involves performing the farmer’s walk… while carrying four 45-pound weights (still attached to the damn rack)… all while pulling a Jeep! What?!

Bruh… what… is that?

“Never hear y’all complaining when that check clear…. GET YA MONEY!!!!” Kamara captioned the video, whatever that means.

And here I thought Donald Trump, Jr.’s deadlift was the most dangerous workout I would ever see someone famous do. Ridiculous.

I guess this is just Kamara’s penance for the 25 boxes of Girl Scout cookies he’s going to be enjoying for the next few weeks.

Not as long as you keep doing mind-boggling stuff like this it isn’t, Alvin.