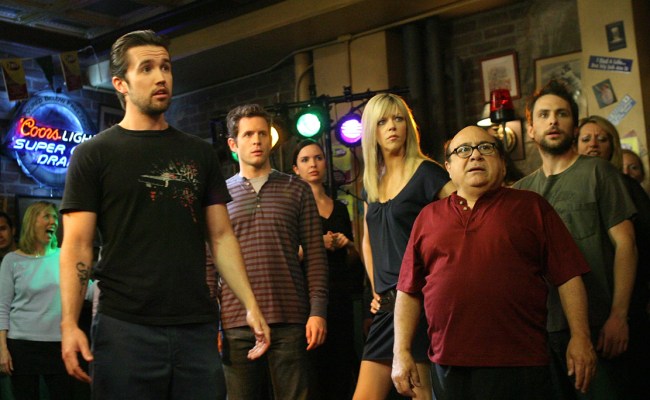 You know the one with Frank and Mac at the beach? Rum ham?

Well, you know the guy who plays Mac, Rob McElhenney? He no longer looks like this…

this image is too powerful pic.twitter.com/ngi6LoFKch

Yes, he did finally harvest that mass. Mac is yoked!

Before I get to just how Ronald “Mac” McDonald got so jacked, those last two pics were taken at the Philadelphia Pride Parade where Frank, I mean Danny DeVito did this…

As for 41-year-old Mac’s incredible body transformation, it may have something to do with the video he posted to Instagram a few weeks ago where he had Eagles lineman Jason Kelce on and referred to him as the original “Fat Mac.”

Quite a change from when McElhenney told The Wrap about putting on weight between seasons six and seven because he thought it would be funnier, “When you’re four months in it and you have to muscle down 1,000 calories for the third time or fourth time in a day and you have to either eat three chicken breasts, two cups of rice and two cups of vegetables—or one Big Mac—you start to see the Big Mac and realize it’s a lot easier to get down. And then every once in a while I would eat three donuts. And every day one of my meals was a high-calorie protein shake.”

As for how McElhenney later lost most of that extra poundage, he had some pretty solid tips, “Losing it is easy. You just stop eating so fucking much. [I’m also] working out three times a week. Regardless of your metabolism, if you stop consuming so many calories, you will lose weight.”

Hmmm… if you stop consuming so many calories, you will lose weight. I’m going to have to try that sometime.