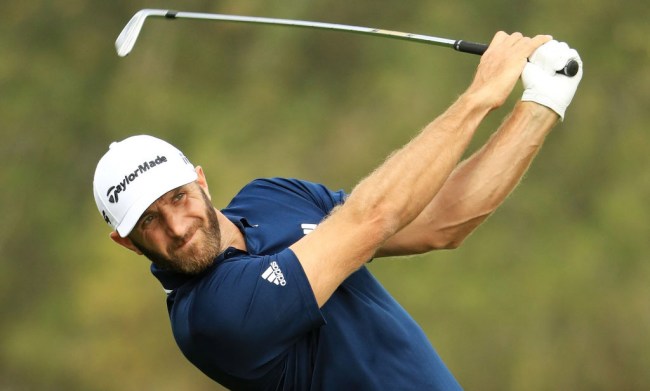 On Wednesday, we heard Tiger Woods discussing the truly insane workout regimen he used to adhere to when he was in his twenties. Today we have the current number one-ranked golfer on the PGA Tour, 33-year-old Dustin Johnson, revealing the diet plan and the workout routine he uses now to stay in top shape.

Long gone are the days when professional golfers were not really considered real athletes. You won’t see many John Dalys or Craig Stadlers on the PGA Tour these days. These days, pros like Woods, Johnson, McIlroy, Koepka, and others utilize special diet plans and customized workout programs to help them be competitive on Tour.

Speaking to Christopher Cason of GQ, DJ, who just became only the fifth golfer (since the rankings were created in 1986) to hold the hold the number one ranking for 52 straight weeks, spilled the beans on what he eats and how he works out.

Here’s a little bit of what Johnson had to say…

What do your workouts look like during the week?

It all depends on my tee times, but I’ll usually be in the gym for two hours before I tee off. I’ll do a 20-minute warm-up, and then will train whatever muscle group we’re focused on that day. If I have an afternoon tee time, I’ll train in the morning, but I’ll still go in two hours before I play and do another warm-up, just to get my body loose and ready to go. Afterwards, I’ll stretch.

How did your diet change when you began working with Joey [Diovisalvi, Johnson’s trainer]?

I’ve always been good with nutrition, but the more you work out, the more you learn. I hired a chef through the Masters about five years ago, and I really liked her and learned a lot from her—she worked with the Atlanta Falcons, and with a lot of other athletes, too. Now, I have a chef who travels with me about 10 times a year, which helps me get what I need when I need it.

I also started paying more attention to hydration. Given the amount of time I’m working out and on the course, staying hydrated is critical for me. I take in lots of fluids throughout the day—a ton of water, and a few of the BodyArmor Lyte drinks, too.

What are you eating during a normal day?

Breakfast is usually oatmeal, and blueberries, raspberries, or strawberries. It can also be an egg white omelet, maybe with some quinoa. Before the golf course, I eat an almond butter-and-jelly sandwich. I have a sports drink on the course, and if I eat out there, it’s usually a protein bar. After golf, if I have my chef with me, I’ll have a bowl of quinoa, veggies, chicken, or fish. That would be my snack afterwards. For dinner, it’s always fish, veggies, and brown rice or quinoa.

Great session today at the Floridian…. getting ready for a solid week in Dallas #byronnelsonclassic

Check out the rest of Johnson’s interview with GQ where he discusses what a rest day consists of for him, how he watches out for signs of overtraining, his thoughts on criticism from the older generation with regard to training, and more, right here.