Deshaun Watson Revealed The Contents Of His Daily Diet, What His Rehab Process Has Been Like 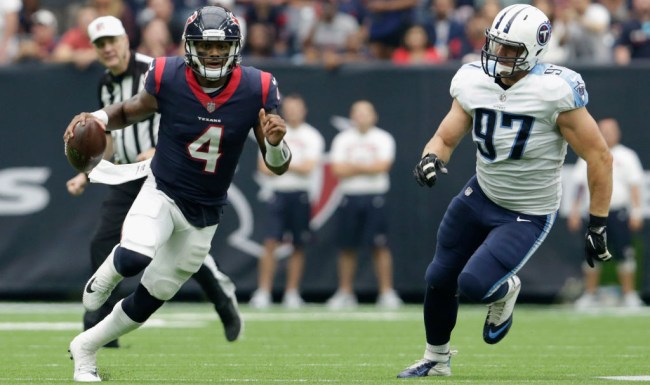 Texans quarterback Deshaun Watson was a revelation when he took over the reigns of the Houston offense from Tom Savage in his rookie season. Unfortunately, he suffered a season-ending ACL injury in his right knee during a November practice, cutting short a season in which he was rocking a 103.0 QB rating with 21 touchdowns (19 passing and two running) in the season’s first seven games.

Watson also tore his left ACL in 2014 and came back to propel his Clemson Tigers to two national championship games, winning one of them against Alabama in 2017.

Now as he once again goes through the rehab process, this time with his Texans teammate J.J. Watt by his side doing his own rehab, Watson spoke to GQ about how he’s had to adjust his diet, what his rehab regimen has been like so far, and how Watt keeps him inspired.

What does a typical day look like for you during the rehab process?
I wake up and eat breakfast before going to the facility for a full day of training. Once I get there, I work directly with my trainer to go over the day’s program, which includes both rehab exercises and isolation exercises that continue to strengthen other parts of my body. After workouts, I head home to eat and focus on recovery.

You’ve been rehabbing from a major injury alongside J. J. Watt. How has that affected your own recovery?
J.J. is an inspiration, not just for me but also for the entire team. He’s been in the league for a while, and he has a lot of advice and tips he’s willing to share. It’s been great to bounce my questions off of him, and to get his honest feedback. Even though it was disappointing to get hurt during my rookie season, it’s been great to have someone like him to push me during the process.

In what ways have you had to alter your diet since the injury?
As a rookie, I worked with my agent and the training staff to figure out what diet works for my body naturally. But after I got injured, it was apparent that I needed to follow a more regimented nutrition plan. I now have a strict meal plan that I follow five times a week.

Watson also said that being raised in the south he’s still got a strong craving for fast food and sweet tea that he has had to cut out of his diet. Now he says his diet philosophy is all about convenience and protein.

He says now he has a Just Crack an Egg breakfast bowl in the morning. Then for lunch he eats lean protein, some starch, and leafy greens for magnesium. For a snack he munches on fruit and granola. And then for dinner he tries to mimic his lunch, but with a protein that is also high in omega fatty acids to aid in his recovery.

Check out the entire interview over at GQ.