Mike Colter, AKA Luke Cage, Shared Some Workout Tips For How He Maintains His Rock-Solid Physique 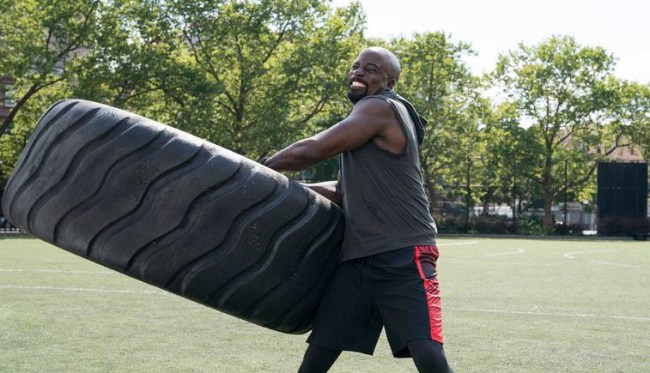 Mike Colter, best known to most everyone as Marvel’s Luke Cage, shared the workout he uses to stay in the kind of shape befitting a bulletproof superhero.

And no, it doesn’t involve breaking NFL Combine records, including running a 3.72 in the 40-meter dash, while working out with the New York Jets.

That doesn’t make it any less impressive though.

As season two of Marvel’s Luke Cage gets ready to hit Netflix on June 22nd, Men’s Health spoke with Colter about what kind of workout and diet regimen he undertakes to look bulletproof.

The 41-year-old Colter has a quick go-to workout he uses because he is always traveling from one coast to the other since he lives in Los Angeles and shoots Luke Cage on location in New York City.

“I’m not training like I’d like to — I’m basically training when I can,” said Colter. “Ideally, I like to train hard. But that’s not my life. Today’s a workout day, but I don’t know when I’ll work out again, because tomorrow my day is full. I travel to New York City on Wednesday, so it’s very difficult to get my workouts in. If I get two days a week, I’ve got to make the most of them; if I get three days, that’s great.”

“People don’t really realize how much stretching and cooling down the muscle matter,” says Colter. “The foam roller is your friend. Don’t be afraid of it.”

“If you work out really, really hard and you don’t put the fuel in the tank, you’re basically wasting your time,” explained Colter. “The muscles are not going to respond if you don’t put in the carbs and the complex carbohydrates that you need to recover.”

“You need seven, eight hours preferably, of recovery time in sleep,” he says. “Even if you can’t get it all at once, you got to find a way to nap.”

Check out the full interview with Mike Colter at MensHealth.com.