‘This Is Us’ Star Milo Ventimiglia Shares How He Stays Fit: Boxing, Lifting, Favorite Meals 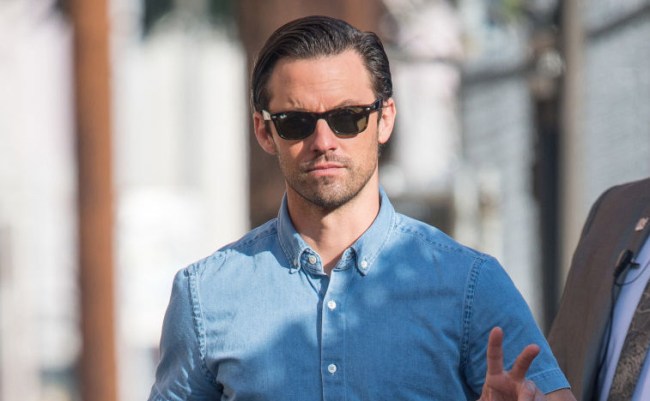 Milo Ventimiglia has toiled away as an actor since 1995 on TV shows like Gilmore Girls, Heroes, and most importantly, in the film Rocky Balboa as Rocky Balboa, Jr. – a role he will be reprising in Creed II!!!! But thanks to his latest role as Jack Pearson on This Is Us, Ventimiglia has cemented himself as a household name.

As such, with the public eye now firmly trained on him, Ventimiglia has been putting in work, both in the gym as well as in the boxing ring.

Ventimiglia is on this month’s cover of Men’s Journal, and shared his unique workout routine as well as some of his favorite meals.

Normally he works out with Rise Movement trainer Jason Walsh, and although the workouts change constantly, they all revolve around lifting.

Walsh has Ventimiglia zero in on his body’s biomechanics to understand how his body should move with weight. They hit all the major muscle groups and leave him sweating.

It’s “as taxing as running a marathon,” Ventimiglia says, even though he’s not doing traditional cardio.

Jason Walsh, by the way, trains a lot of Hollywood stars as his Instagram is littered with famous faces.

#tbt 2015 Day 1 of shooting “Jason Bourne” in the Tenerife, Canary Islands just 4 weeks after wrapping “The Martian”. Such an exceptional crew to work with. 📷: @jasinboland

This photo was taken from the project “13 Hours” we did with John Krasinski in 2016. His dedication to hard work and smart training gave him a strong, lean, and healthy body as a result. Don’t think training John was an easy task… he also happens to be one of the most animated and comedic fuckers that I know. John is as talented as they come as he wrote, directed, and starred in my favorite movie so far this year, “A Quiet Place”. John is also on the cover of the August issue of Men’s Health discussing his new role as Jack Ryan, which comes out August 31 on Amazon!! So proud . Good things happen to good people. @johnkrasinski @13hoursmovie @aquietplacemovie @jackryanamazon @menshealthmag #dadbod

Give them strength and watch them fly. Brie is legit! She earned every bit of it through blood, sweat, dedication, and yes, tears. Couldn’t be prouder. @brielarson #strongwomen

Alison Brie exemplifies what hard work, dedication, and great training does for the mind and body. Thank you @womenshealthmag for putting such a strong role model on your December cover. I’m very proud of her and all of her hard work. SHINE GIRL!!! #strongwomen #strongissexy #training #womenempowerment

When the 41-year-old Ventimiglia is on the road, he says he uses boxing to stay fit, and will go to any gym available to hit the heavy bag, even if it’s the “dirtiest, grittiest, gnarliest gym” he can find.

As for his diet, he keeps it simple, “Be healthy and eat good stuff.”

At home, Ventimiglia mostly chows down on dishes with beans and rice, or different kinds of pasta. As he explains it, simple meals like these check three important boxes: They’re easy to whip up when he’s short on time; they’re healthy; and they make for a quick cleanup after he’s finished cooking (always a plus).

Ventimiglia also keeps fit by snacking throughout the day rather than gorging on a big meal, and his snack of choice is nuts, all kinds, which he keeps handy in jars in his kitchen.

“I feel like I’m more of a snack guy than a big meal guy,” he said.

What's the one piece of gear you can't live without? For @MiloVentimiglia, the answer's simple. pic.twitter.com/Sxek0QTkYc