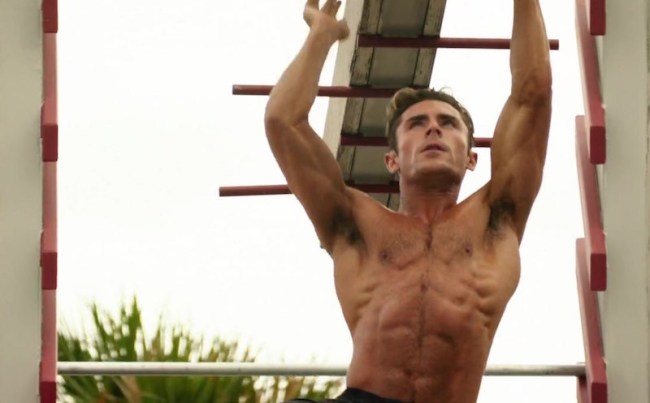 Last year’s race for the Best Picture Oscar at the Academy Awards was a tight one, with the statue ultimately going to that movie where a woman bangs a fish-man because “art.”

However, there was another aquatic-themed film that also garnered its fair share of nominations— although it was up for a slightly less prestigious honor.

Baywatch was panned by critics when it was released in 2017 and garnered a number of nominations at the Razzie Awards, an annual event that celebrates the best of the worst movies of the year.

Despite the reviews, I genuinely and unironically enjoyed Baywatch, which was basically just an excuse to watch a bunch of attractive people taking the source material as seriously as it deserved.

One of those attractive people was Zac Efron, who got absolutely jacked while preparing for the film thanks to an absolutely absurd workout and diet regimen that resulted in some seriously impressive results.

Nothing like a little #NinjaWarrior training to start the day. Months and months of training for this moment… Bring it on @therock let's do this ALL DAY baby! #Baywatch #nowiresneeded

Efron’s efforts enabled him to channel his inner Ninja Warrior and he put his talents on full display in a scene early in the movie.

Based on the results, it might be tempting to follow in Efron’s footsteps but the actor recently advised normal people that it might not be such a great idea while speaking with People:

“It’s definitely fun because you get to put everything on the line in terms of your work ethic and seeing how far you can push it.

It’s a finite period of time, but I would not consider that a healthy or normal way to live everyday life.”

He also elaborated on how his diet impacted how he treated other people and implied carb withdrawal might be an actual thing:

“My mood was terrible. In retrospect, I can look back now and say that. People weren’t telling me I was mean or anything, but I could feel that lack of carbohydrate.”

Welp. I guess my New Year’s resolution is already out the window.