Want To Train Like A Running Back? Try Out Leonard Fournette’s In-Season Maintenance Workout Regimen 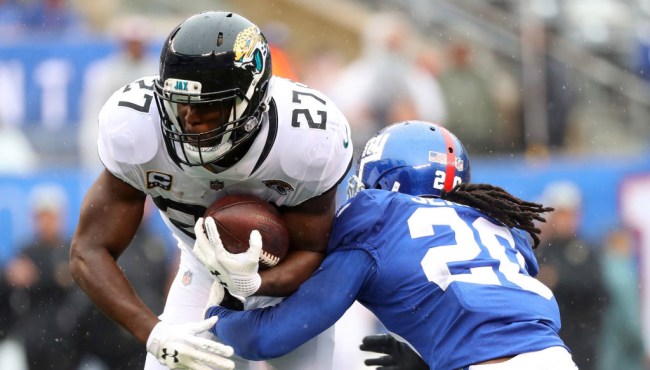 After being compared to College Football Hall of Famer Herschel Walker while playing at LSU, Leonard Fournette certainly lived up to the hype during his rookie season in the NFL.

Now, the 23-year-old running back, who keeps a $100 bill under his uniform, is in the midst of season number two, and while he has been dealing with a hamstring injury, he credits his in-season workout regimen with being one of the reasons he’s been able to return to practice in good shape.

Speaking to Men’s Health about how his in-season workout plan compares to the off-season, Fournette said, “I just do the same weights I usually do. I don’t really focus on who I’m going against or how tough they are. I just try to do what my body can maintain and what I’m used to.”

Fournette says he tries to get in this particular workout at least three times a week.

Here’s what he does…

3 sets of planks, 1 minute on each side

Fournette performs a standard front-facing plank and then a plank on each side, holding each one for 60 seconds.

“When a corner comes to hit you, they kind of bounce off you and you stay on your feet,” said Fournette. “So, planks help a lot.”

3 sets of barbell back squats, 3 to 4 reps each

He squats between 275 and 315 pounds to help keep his legs strong – an important attribute for a running back that needs to be able to break tackles and finish runs.

As for why he doesn’t do more, he says, “I don’t want to kill my legs too bad because at the end of the day, we still have practice, so I just try to maintain.”

4 sets of 4 reps on the bench press

Fournette uses this exercise to not only maintain his upper-body strength, it also helps him work out all the kinks in his body after a grueling day on the gridiron.

“You take a lot of pounding, so you have a lot of bruises on your arms, your legs and I’m just trying to get that fresh blood back going in my body,” said Fournette.

He also suggested adding pushups to your bench work, if you feel like adding an additional challenge.

20 minutes at a challenging pace on the exercise bike

“The more in season comes, [the exercise bike] helps to get our legs back under us and keep us fresh,” he explained.

“It definitely helps you a lot because of a lot of places where you think are not bothering you, you’re releasing a lot of the toxins you have in your body,” said Fournette.

Learn more about Fournette’s and other workout regimens over at MensHealth.com.