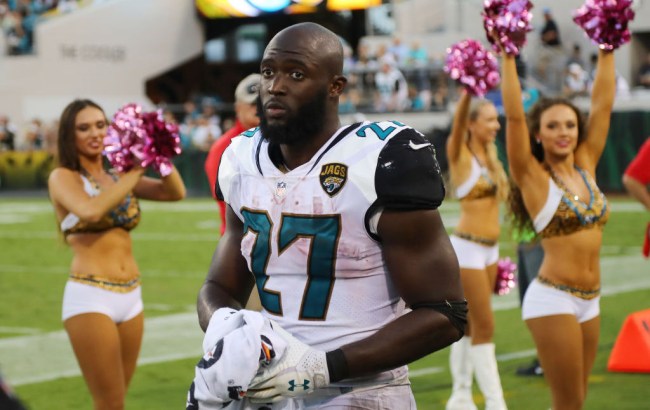 Leonard Fournette was the fourth overall pick in the 2017 NFL Draft, which came with a nice $27 million contract and an even nicer $18 million signing bonus.

Since then, Fournette has established himself as an awesome guy by putting his money to good use, which included donating $50,000 to aid with Hurricane Harvey relief and offering to pick up the bill for an LSU student who couldn’t afford to pay for her final year at his alma mater.

He also made the decision to melt down all of the trophies he earned in his earlier years to gift a high school football team a new set of weights to train with, which is one of the cooler things I’ve seen an athlete do to give back.

It’s clear Fournette has more than enough money to play with— both figuratively and literally.

On Thursday, Fournette was on the sidelines during a joint practice between the Jaguars and the Vikings when reporter Pierre Noujaim spotted an interesting sight: a $100 bill on the back of the running back’s pads (which are the same ones he used while playing at LSU).

He inquired about the unconventional alternation to his equipment and discovered Fournette has decided to use a good luck charm this year to get himself over the benchmark he’s set for himself.

When asked why he plays with $100 sealed into his pads, #Jaguars RB Leonard Fournette says it’s because “100 yards a game and I’m 100% real.” #NFL #VikingsCamp pic.twitter.com/00HIAgBWUW

As Complex notes, it turns out Fournette isn’t the only person on the Jags to take the field with (as Wilmer Valderrama would say) cash money on his person.

Last week, someone else spotted a comparatively paltry $20 bill on the back of Jalen Ramsey’s uniform (although he likely picked the denomination because of his jersey number).

.@Jaguars Leonard Fournette has a $100 bill taped to his shoulder pads (which are from his LSU days).

Jalen Ramsey had a $20 bill on his pads last season.@PhilHecken @UniWatch pic.twitter.com/dPuCJNbX5z

I’m personally hoping this will start an arms race between NFL players to see who can play with the most cash tucked into their uniform.

When you consider the diamond earring Dez Bryant once lost and Aqib Talib’s penchant for snatching chains, sealing money inside your pads is probably one of the better ways to flex on a football field.