Jason Momoa Called Out Chris Pratt For Holding Bottled Water In An Ad, Then Apologized Because He’s Cool Like That 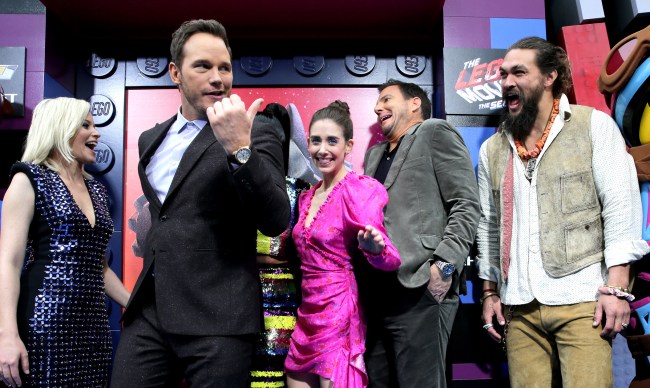 Much like Jennifer Lawrence and other celebrities, Chris Pratt is getting in on the money grab that is Amazon putting famous names on lists of crap that these celebs supposedly “recommend” people purchase.

We know this because on Tuesday Pratt posted a Instagram photo of himself as part of this sham, I mean program.

“You’re probably wondering why I’m standing here, low key flexing, gazing into the distance… well, turns out I’m teaming up with @amazon to show you guys everything I use for my workouts, keeping active, and all that fun stuff to get you prepped for 2020. #FoundItOnAmazon #Amazon #Ad,” Pratt wrote in the caption trying be witty.

We also know this because Pratt’s fellow superhero and LEGO Movie 2 co-star Jason Momoa called him out for a detail he noticed in the advertisement: the plastic water bottle Pratt is holding.

“Bro I love u but wtf on the water bottle. No single use plastic. Come on,” Drogo, I mean Momoa, commented, which because internet exploded in Pratt being inundated with righteous folk seconding Momoa’s take.

The thing is, Momoa was being sincere. In April, he shaved off his beard for the first time in seven years to promote recycling. And in August he protested construction of the Thirty Meter Telescope taking place on land considered sacred to native Hawaiians.

Pratt was quick to apologize to Momoa, claiming it was an oversight that he would not let happen again.

“Aquaman! You’re completely right,” Pratt commented back. “Dammit. I always carry my big gallon size reusable water jug around with me too. I even had it that day!!! If I remember correctly somebody threw that plastic bottle to me in the photo shoot cause I didn’t know what to do with my hands! I never know what to do with my hands! So uncomfortable. For real tho. Love you too buddy. My bad. I don’t want your home of Atlantis covered in plastic. Hear that kids? Reduce. Reuse. Recycle.”

Being the nice guy that he is, Momoa, wanting to make sure fans don’t think he has anything against Pratt personally, followed up with his own Instagram post, writing, “BRO you know my children and I are madly in love with you and I love everything you do. I’m sorry this was received so badly today I didn’t mean for that to happen. I’m just very passionate about this single use plastic epidemic. the plastic water bottles have to stop i hope u make a reusable water bottle for amazon so we all can purchase. You’re an inspiration to many I’m one of them. I’ll send you a case of MANANALU. All my Aloha, Da Momoa’s.”

Consider this Exhibit #4,325,456 that only true bros are willing to call each other out in public when they believe one of them has gotten out of line.