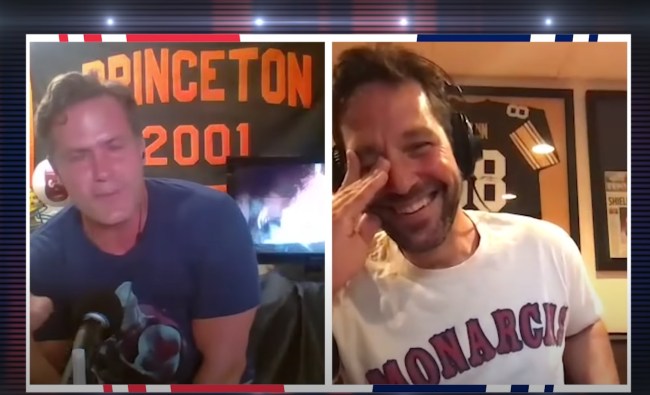 Are you ready to feel pretty old for a quick second? It has been 5,902 days since Anchorman first hit theaters back in July of 2004. For anyone keeping score at home, that’s 141,648 hours, or 8,498,880 minutes, or 509,932,800 seconds since the world was first blessed with the genius of Ron Burgundy and his Evening News crew of Brian Fantana, Brick Tamland, and Champ Kind. It’s also been seven years since the release of Anchorman 2: The Legend Continues even though it feels like just yesterday.

Even though 16 years and 7 years aren’t exactly notable anniversaries, Paul Rudd hopped on Ringer’s 10 Questions With Kyle Brandt on YouTube to talk about Anchorman and Anchorman 2 and we’re all better for it. He shared his favorite moment from filming (MILK!) along with an NSFW story about Will Ferrell that was too raunchy for the final film.

This clip is just another reminder in the infinite collection of Paul Rudd footage that reminds us he’s one of the nicest and most genuine people in Hollywood. The guy is just always in a great mood and seems so genuinely excited to be doing whatever it is he’s doing at that moment. It’s infectious. And if you’re an Anchorman fan you’ll surely enjoy this:

Too raunch for the DVD outtakes. That’s when you know it’s good. When Will Ferrell starts discussing the volume of his spunk and they have to turn the cameras off. It’s days like that the cast knows everyone is firing on all cylinders.

Side note: is everyone else already completely exhausted by the number of political ads on YouTube already? I haven’t clicked the ‘play’ button on a YouTube video in weeks without first having to sit through the same political ads I see on TV all day long as I’ve got The Price Is Right playing in the background while working. I’m already losing my mind with the overexposure to these hit ads and we’ve still got months to go. I guess what I’m saying is if you’re already losing your mind, you’re not alone.