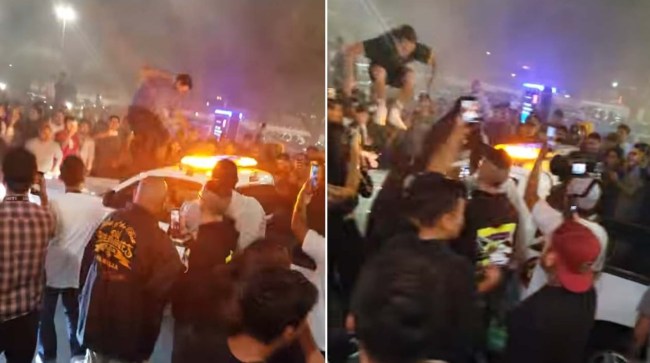 Wednesday would have been Paul Walker’s 45th birthday and many fans used the day to remember the Fast and Furious star. There was even a meetup organized by car enthusiasts to pay tribute to Walker earlier this week. Sadly, the hangout dedicated to Walker spiraled into chaos where there were fights, cars vandalized, and a security guard was attacked.

Walker died on November 30, 2013, from a fiery car crash. A Paul Walker memorial car hangout went down around 11 pm on Wednesday in West Covina, California.

The event attracted plenty of car buffs gathered at the parking lots outside a Best Buy and a Home Depot. Everyone was checking out each others rides and then some started smoking their tires and doing donuts. That’s when a mall security truck attempted to disperse the crowd. It didn’t go as planned.

The security guard was attacked as soon as he exited his vehicle. Because nothing says “Happy Birthday!” quite like punching someone in the skull. The windshield of the mall security pickup truck was also smashed and the crowd attempted to tip the vehicle.

Police then arrived at the scene to breakup the Paul Walker meetup.

Eventually, a fleet of tow trucks were also called to the parking lot where up to 50 cars were said to have been towed.

For a Fast & Furious meetup, this event went down pretty much as anyone should expect.