PBR Just Launched A Weed Drink, So Now You Can Have Beer And Get Stoned Too 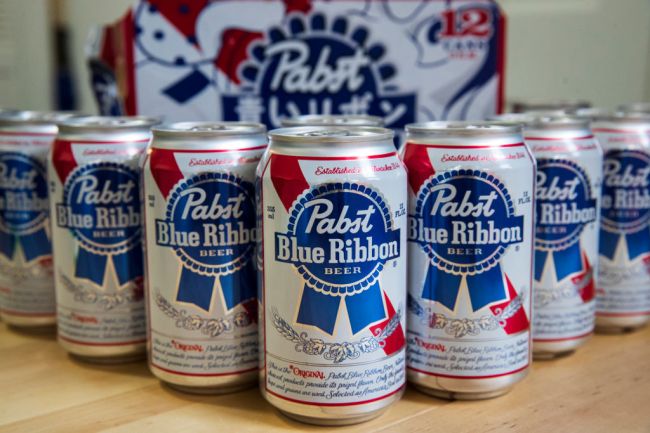 It used to be the only people you saw drinking Pabst Blue Ribbon were trailer park socialites hovering over the hood of a 1976 Camaro while trying to figure out how to get the distributor combustion gasket off the piston thingy. Fast forward a few decades, however, and, well, the downtrodden of beers has, through either marketing wizardry or a fiendish contract with the Devil, miraculously evolved from its cheap, wife-beating, stepdad drunk image and graduated to cool.

Now hipsters and failed rockabilly musicians all across America are lapping this stuff up with more enthusiasm than a dehydrated raccoon at a puddle of dumpster juice. And these greasy, tattooed, Misfit shirt-wearing bastards aren’t even going home afterward to rebuild a Hemi four-banger or terrorize their families to the point of getting slapped with a restraining order. No sir. Maybe I’m a bit cynical, but it just seems disingenuous to drink a beer, one that got so many of our relatives thrown in jail and put on probation, swelling into a household name next to the likes of Oscar Meyer and Oreo. And the situation is only getting worse, let me tell you. Now, the grandad of brews has decided to throw caution to the wind and get the nation high as balls. That’s right, 2020 is apparently the year of Pabst Blue Reefer!

Jumping on the hard-seltzer bandwagon, PBR recently unleashed a new THC-infused beverage that it plans to peddle in legal weed states. The company wants to capitalize on the trendy cannabis scene in the same way that nearly every other alcohol corporation has been trying to do since reefer went semi-mainstream. We use the word “trying,” because none of these bud-infused beverages have really taken off so far. Potheads are, in a lot of ways, stuck in the past, and most of them would still prefer to smoke than embrace a more civilized method of consumption.

The PBR seltzer is a training-wheels version of stoner sips. While many weed beverages, like Lagunita’s Hi-Fi Hops, come packed with 10mg of THC per bottle, Pabst is only putting 5mg in theirs. The beverage maker is apparently trying to stay true to its brewing roots. After all, since nobody ever really gets drunk by knocking back too much PBR, they shouldn’t get that stoned either. Excellent thinking, boys!

There are a few things that the curious Weed-BR connoisseur should know about this seltzer before trying to track it down at their neighborhood liquor store. First of all, it is officially called PBR Original Lemon Cannabis-Infused Seltzer and it’s only available right now in California – and only in marijuana dispensaries. It can also be purchased online, but the company isn’t about to ship it to anyone where pot prohibition remains the law of the land. Sure, you could always have a friend from the area put some in the mail. Just know that this is illegal as shit and could get you guys pinched for federal drug trafficking.

Come on, who wouldn’t risk doing time in a federal penitentiary for some THC seltzer? Um, US! That’s who. Don’t be an idiot. The next crucial detail is the seltzer is a non-alcoholic beverage. All it consists of, really, is purified water, lemon concentrate, sugar, and a small dose of THC. And you’re probably going to need a second job if you want to make these beverages part of your weekend party repertoire. A four-pack costs a whopping $24, which is consistent with other cannabis-infused drinks. But super expensive, no less.

But that’s okay, because unlike regular PBR, the average person isn’t going to be able to suck them down one right after another throughout the course of the day. Weed drinks just hit differently than beer. They can’t be moderated socially in the same manner. Even though this seltzer only contains 5mg of THC, that’s still more than most beginners are going to need before shit gets weird. Two of them, and you’ll be incredibly stoned. Three, and, sweet Jesus, you could find yourself riding around on the back of a goat or perhaps even smack dab in the middle of an international incident.

I was in Los Angeles last year on an assignment for High Times, and I got the opportunity to try a THC drink from Lagunitas. One bottle (10 mg THC) and I nearly lost my legs. It was like my liver just gave up and let every bit of liquid weed hit my brain all at once. I imagined the THC was driving around my body in a Monte Carlo while blasting RUSH’s “Moving Pictures” album at full volume. It was just a little too heady for me.

My advice for those who haven’t tried them yet is to drink slow. If you don’t, rest assured, you are going to meet today’s Tom Sawyer and his mean-mean pride.