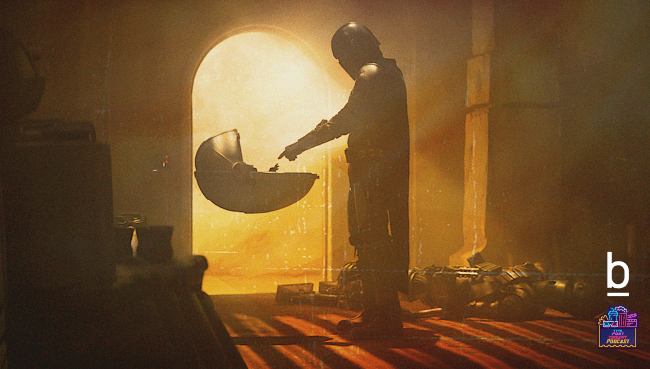 As someone who grew up with the famously underwhelming prequels, it wasn’t until adulthood that I truly understood what the magic of Star Wars could be. The moment of realization was so poignant, in fact, that I can even trace it to the exact day. It was December 27, 2019 — the day the season one finale of the first-ever Star Wars series hit Disney+.

If you’ve seen the show then you likely remember the exact moment I’m talking about: holed up with Cara Dune and Greef Karga in a Tatooine saloon surrounded by dozens of Moff Gideon’s men, Pedro Pascal’s Mandalorian bursts through the door as the score kicks in, taking out one Stormtrooper with his blaster before planting a kick in the chest of another.

Truly can not stop thinking about this moment in #TheMandalorian.

As thrilled as I’ve *ever been* while watching #StarWars. pic.twitter.com/u9tp34Eb0K

Given how clearly I can recall when Star Wars “clicked” for me, I was wondering if Pascal, the Mandalorian himself, experienced a similar moment of awe, so I asked him as much during an interview ahead of the release of his new film The Unbearable Weight of Massive Talent.

BroBible: “I grew up with the prequels. And, for me, this show [The Mandalorian], was the first time that I finally understood ‘Star Wars magic’. It was the scene in the season one finale where you guys are holed up in the bar, and Mando — the door opens, you kick your way out and the score swells up — and for the first time in my life, I was like, ‘Wow, Star Wars magic. I finally get it.’ Is there a moment like that for you, in your show or the franchise at large?”

Pedro Pascal: “I was born in ’75, so Star Wars is just part of my upbringing — the first films. Similarly — like it is to step on set and get in front of the camera with Nicolas Cage as your scene partner — is a very similar experience to have stepped onto the set of The Mandalorian. Because there is so much that is made visually with this Volume apparatus [the technology used to display special effects], that is kind of a new wave of technology, but there are very, very practical effects that are involved in these very immaculate and incredible sets that are built. And it was like stepping into your own imagination that was so influenced by these first films that came out. And there couldn’t be anything more bizarre and beautiful in that regard, because it was so much a part of my childhood experience.”