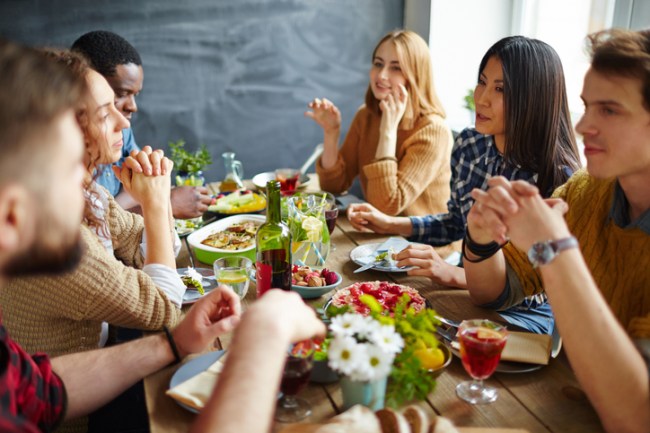 Friendsgiving is a relatively new concept where friends who are either unable to travel to their hometown to visit their family, or have made a conscience decision to not visit their family members on Thanksgiving, get together to have their own Thanksgiving meal amongst friends. If you’re attending your first Friendsgiving, keep an eye out for these characters that you’re bound to run into this year.

The host is the anchor to the entire party. Without the host, everyone would spend the day spread out across the city at various Kentucky Fried Chicken restaurants trying to grasp at the outer regions of what constitutes a Thanksgiving meal. Chicken is basically Turkey right? The overwhelmed host is constantly on edge walking away from conversations to check on the oven. They take way too much time to plan things that no one will even participate in like having a “pin the feathers on the turkey” game set up. No one really wants to be blindfolded only to walk slowly towards a wall, but the overwhelmed host did take the time to cook an actual turkey and they keep saying things like, “It’ll be sooo fun!” so eventually you have to play at least once. The overwhelmed host is friends with everyone at the party, but no one is going out of their way to invite the overwhelmed host out to happy hour come next Friday.

2. The person who has had a bit too much to drink

There’s always one. Before the end of the first quarter of the first Thanksgiving football game, this person has had a full bottle and a half of wine already and they show no signs of slowing down. They went from raw to smashed potato in two shakes of a turkey leg.

3.The person from work who invited themselves at the last minute

You’ve managed to vaguely describe your Thanksgiving plans to this coworker for a full week by saying things like, “Yeah I think I’m just going to have a small get together with a couple of friends. Keeping it pretty low key.” While you’re trying to slide out of the office at 4:30 pm on Wednesday, that person from work who only quotes movie lines gets desperate enough to just straight up ask, “Hey do you care if I drop by your party?”

Your guilt reaches a breaking point and you cave in and invite them to come. At the party, they follow you closely everywhere because they don’t know anyone else. They constantly trap you into one on one conversations making inside jokes about the people that you work with that no one else understands. To make matters worse, you were planning on trying to make a move on your crush at this party, but now you’re stuck entertaining your coworker who won’t stop talking about how loudly Rebecca chews her salad at her cubicle.

4. The person who forgot to bring anything

5. The you gotta try these bars person

Somebody (who is not the host) will undoubtedly go out of their way to actually bake something. While the effort is appreciated, it’s quickly dampened by how much you have to listen to them talk about their baking process. Likely it will be a “family” recipe that just happens to match the recipe listed on the back of a bag of chocolate chips. They will always be hovering over their offering of goods saying things like, “You got to try these bars,” and “It’s my grandma’s recipe,” and “So good right?”

6. The person who is so hungover they can’t even eat

The night before Thanksgiving is quickly rising up the charts alongside St. Patrick’s Day and Halloween as one of the best drinking days of the year. It makes sense because it precedes Thanksgiving Day which is known for overeating and napping, two of the greatest hangover cures. However, if you’re so hungover you can’t eat for fear of throwing up, then you’ve just wasted the best eating holiday of the year.

7. The person with nothing interesting to say

Simply put, this is the person that has nothing really interesting to say. No one is really sure who they are friends with, and when you try to spark up a conversation and ask them if they’ve been watching anything interesting on Netflix they respond with, “I’m not really a Netflix person.”

This includes people that are on gluten free paleo diets, vegans, and people with peanut allergies. This is the You Gotta Try These Bars Person’s worst nightmare. They can’t try these bars when these bars have peanuts in them.

9. The agreeable political person – A sharp contrast to your racist uncle that you’d see at your family Thanksgiving who says things that make everyone uncomfortable like, “Call me old fashioned, but I just think women belong at home raising the family and keeping the house clean.” Making matters worse is the fact that this is the first time that you’ve brought your girlfriend over to meet your family.

Unlike most family Thanksgiving meals, Friendsgiving is full of like-minded friends with similar political views. The agreeable political person says things that everyone can agree on like, “I think every vote should count,” and “I don’t want to offend anyone, but I just don’t believe that kids should be locked in cages and starved while being tickled by a giant Reverse Tickle Me Elmo.”

10. The person that brought something that somebody else already brought – Come on Brian. Kaitlyn was in charge of dip not you. You were supposed to bring the vegetable platter. What are we going to do with all this dip?

The problem with trying to plan something with a bunch of people who don’t have families is that preparing for things is a relatively new thing. Don’t overthink it and just enjoy your friend’s company. Happy Thanksgiving everyone!