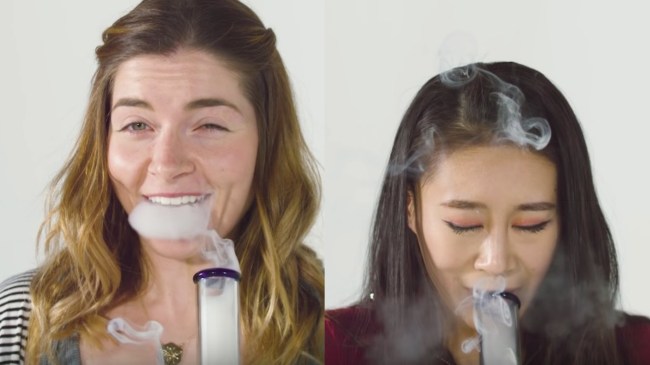 There’s something about people smoking weed for the first time that’s endlessly fascinating to people who have smoked weed before.

You see this often when people hit a certain age and their friends start smoking. The first person to smoke weed then wants to watch all of their friends take their first toke until there’s only one friend left who haven’t poked the smot and everyone wants to sit in a circle and watch this person rip a bong like it’s a special on BBC’s Planet Earth. Sound familiar or was this just my experience growing up?

This video isn’t really comical like the one where the grandmas get baked and play games, this video’s more mesmerizing. They’re filming these people up close with a 4K camera as they smoke and then showing the slow-mo HD footage. You can see them getting baked AF in real time and how hard the coughs hit. The action doesn’t even start until around the 1:10 mark so feel free to skip ahead in the video.

I guess this ‘First Time’ concept is something that Cut has been running with lately on YouTube. I was scrolling through their recent videos and saw that they filmed a clip of people taking shots for their first time which isn’t quite as aesthetically pleasing as people smoking weed but it’s still pretty great to watch these people choke down shots that burn.