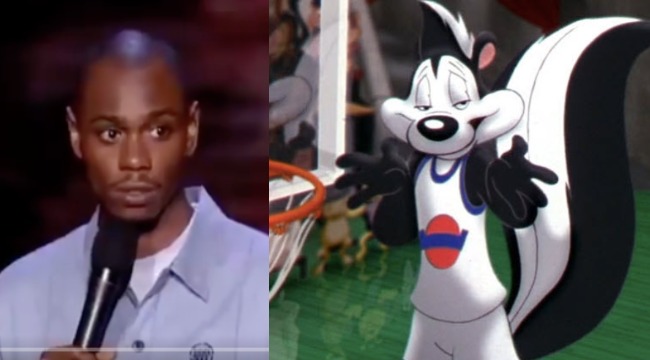 Pepe Le Pew just joined the 2.4 million French citizens who out of work after it’s being reported that the thirsty skunk has been axed from the upcoming sequel Space Jam: A New Legacy on July 16.

Le Pew has recently been charged with adding to “rape culture” by New York Times columnist Charles M. Blow, but the omission from Space Jam was decided upon long before.

20 years after Chappelle said it.

According to Deadline, a scene shot in 2019 between Le Pew and and Jane the Virgin actress Greice Santo was left on the cutting room floor after director Malcolm D. Lee took the reigns from Terence Nance, who was ousted over “creative differences.”

The scene in question:

He begins kissing her arm, which she pulls back, then slamming Pepe into the chair next to hers. She then pours her drink on Pepe, and slaps him hard, sending him spinning in a stool, which is then stopped by LeBron James’ hand. James and Bugs Bunny are looking for Lola, and Pepe knows her whereabouts. Pepe then tells the guys that Penelope cat has filed a restraining order against him. James makes a remark in the script that Pepe can’t grab other Tunes without their consent.

sorry for getting socialistically PC but personally i think its ok to remove the children's cartoon whose entire comedic bit is forcing himself on women pic.twitter.com/XnJtMRVOWa

Actress Greice Santo, a victim of sexual harassment and founder of a non-profit that aims to empower domestic violence victims, was reportedly devastated to hear her scene with La Pew was cut.

A spokesperson for Santo told Deadline:

“This was such a big deal for Greice to be in this movie. Even though Pepe is a cartoon character, if anyone was going to slap a sexual harasser like him, Greice wished it would be her. Now the scene is cut, and she doesn’t have that power to influence the world through younger generations who’ll be watching Space Jam 2, to let younger girls and younger boys know that Pepe’s behavior is unacceptable.”

Not a huge loss for the Tune Squad. Dude dropped like one bucket the entire season and was an awful locker room guy.