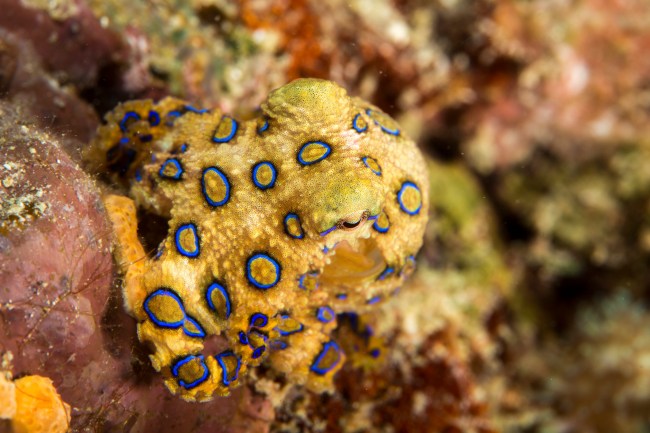 Australia is home to some of the deadliest creatures on the planet. There’s the infamous Box Jellyfish and Irukandji jellyfish. They’ve got bull sharks, Great Whites, and every other type of shark. There are saltwater crocodiles and the Sydney funnel web spider. All of these creatures are capable of killing in an instant.

Also on that list is the absolutely gorgeous blue-ringed octopus. It’s found throughout the Pacific and Indian oceans and can be identified by the beautiful blue rings all over its body. The colors become much more prominent as a warning to potential predators when the octopus feels threatened. These creatures produce a venom that’s deadly enough to kill 26 adult humans in a matter of minutes.

There’s currently NO antivenom available to combat the blue-ringed octopus. People who are bitten by these creatures often have no idea because the bite is painless and they only realize what’s happened when the paralysis begins to set in and death within minutes.

This unidentified tourist in Australia apparently has never heard of any of this because they filmed themselves picking up a blue-ringed octopus and holding it in their hand. One of the deadliest creatures on the planet and they’re holding it like someone who’s making dumplings.

According to Gizmodo, this video originated on TikTok but later made its way to Reddit.

I guess we should note that while this octopus has enough venom to kill 26 adult human beings in a matter of minutes, the bites aren’t always fatal. Presumably, this is due to the amount of neurotoxin tetrodotoxin that’s released. One of the comments on Reddit referenced someone who’d been bitten and was in a state of paralysis all day on the beach staring into the sun:

“They survived, but nobody had really thought about the fact they’d been staring up into full midday sunlight for a couple of hours throughout the process with their eyes wide open, pupils fully dilated,” the Redditor said. “Total paralysis, easy for the first-aiders to not think to cover their eyes. Caused irreversible damage. They permanently lost their vision.” (via)

What’s crazy is how small these creatures are sometimes when they’re among the deadliest creatures on the planet, ranging in size from 5 to 8-inches (12 to 20cm). Here’s a look at a particularly small one.

If you ever find yourself in Australia or in the Indian/Pacific oceans and see a gorgeous octopus covered in blue rings you should just leave it alone. You don’t want to be the guy who ended up going viral because he died filming a video for Instagram, do you?