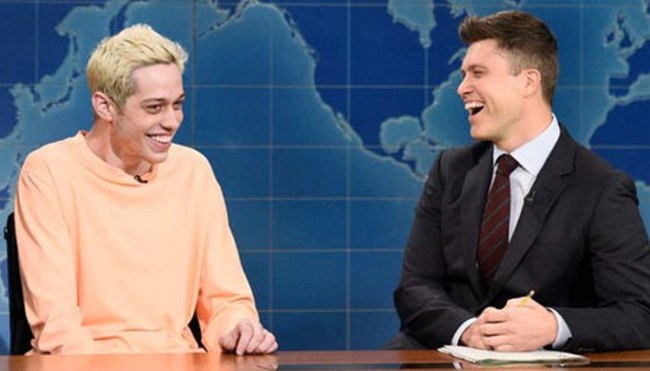 Along with the Wu-Tang Clan and the noxious odor that emanated from the Fresh Kills Landfill for half of a century, Pete Davidson is one of the most notable things to come out of Staten Island, as the comedian has made quite a name for himself since joining the cast of Saturday Night Live in 2014.

Is the native of New York City’s most-maligned borough particularly fond of where he was raised? Well, based on what he’s had to say in the past, it doesn’t seem like that’s necessarily the case.

With that said, the man who starred in The King of Staten Island is still one of its most noteworthy ambassadors, and now, he’s used some of the small fortune he’s managed to amass for a hilariously random purchase along with one of his SNL stars (and fellow Staten Island product).

According to The New York Post, Davidson and Weekend Update co-anchor Colin Jost recently linked up with real estate investor Paul Italia (who operates The Stand comedy club) for a new venture that hinged on an acquisition that was finalized this week: the purchase of a decommissioned boat that was once a member of the Staten Island Ferry fleet.

The outlet reports the trio bought the 60-year-old vessel dubbed the “John F. Kennedy” for $280,000 at an auction that was held by the city after it was retired due to mechanical issues. The proud new owners have been given 10 days to transport the ferry from the Staten Island terminal where it’s currently being stored to a new location, where they will then start renovations to realize their goal of transforming it into “a live entertainment event space.”

Now, I like to think this is really an elaborate cover story and that Davidson actually invested in the boat so he and his recently beefed-up security team can use it to flee into the Atlantic Ocean in the event Kanye West manages to track him down in New York City.

When you consider the ferry is currently unable to operate under its own power, that doesn’t appear to be the case, but hey, a man can dream.