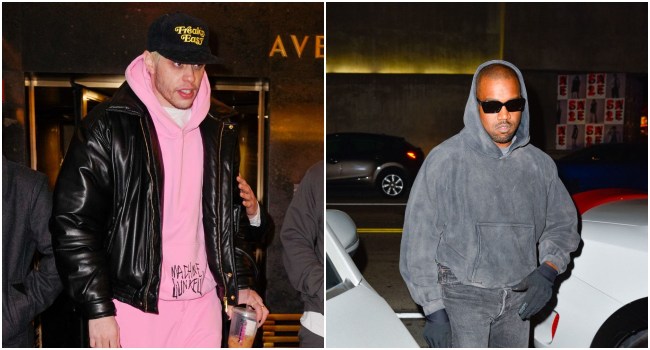 The ongoing saga between rapper Kanye West and comedian Pete Davidson — who is currently dating West’s ex-wife Kim Kardashian — has taken another turn, as reports indicate that Davidson, 28-years-old, has hired additional security after West, 44, rapped “God saved me from that crash/ just so I can beat Pete Davidson’s ass,” in his new song “My Life Was Never Eazy.”

“Pete isn’t worried about Kanye, but he is concerned about the massive fanbase that Kanye has. His devoted followers listen to his songs and act upon them. That’s why Pete is now using security,” sources tell Radar.

“Until recently Pete never had security with him when he was out and about, even when he was engaged to Ariana Grande. But dating Kim (Kardashian) is a totally different level of fame. Pete is now a superstar, which comes with a price. As much as he still wants to be low-key and hang with his friends, the reality of his situation has changed.”

West has recently shown that he’s willing to get violent, as the Los Angeles police department is investigating the rapper for battery after he allegedly assaulted a fan who was asking for an autograph.

West has actually admitted that he punched the unidentified victim and said that he did so because he was in a “bad mood” after seeing Davidson kiss Kardashian in front of him.

The beef with Davidson is just the latest chapter in Kanye’s public divorce with Kardashian, as he also recently purchased a home right across the street from hers.

Given the egos of all parties involved, we doubt this beef is going to come to an end anytime soon.

RELATED: Kanye West Buying A House Across The Street From Kim Kardashian Has Inspired Glorious Memes