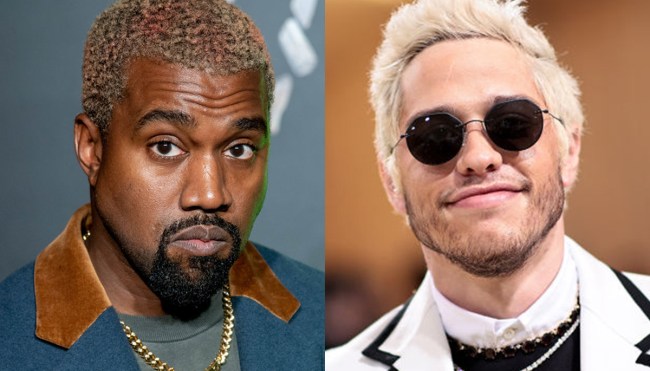 It’s been a rough year for The Artist Formerly Known As Kanye West and a pretty good one for Pete Davidson, as the Saturday Night Live star swooped in to help Kim Kardashian rebound after she filed to divorce the rapper now legally named “Ye” early in 2020.

In one of the least surprising developments you’ll ever encounter, West hasn’t exactly handled the situation with the utmost composure and grace. After begging Kim to return to him during a concert in December, West opted to purchase the house directly across from where Kardashian lives later that month because he’s totally, definitely not clinging to the past nor desperate to do whatever is necessary to reunite with her.

It does appear Kanye has managed to bounce back a bit recently after striking up a relationship with Uncut Gems actress Julia Fox, but based on a clip that recently surfaced online, it would appear he’s still not exactly thrilled with Davidson.

According to TMZ, West decided to take aim at the comedian while recording bars for an as-of-yet unreleased track where he references the car crash that led to the track that put him on the map by saying, “God saved me from that crash just so I could beat Pete Davidson’s ass”

The outlet claims the line was uttered during a recording session for a song with The Game that’s supposedly dropping on Friday night (which may also feature a cameo from DJ Premier as well as a possible appearance from Pusha T because it’s apparently 2006 again).

Of course, when you consider Kanye’s history, you’re probably not going to want to hold your breath when it comes to the actual release, but regardless, it looks like we might have a fresh new feud on our hands.