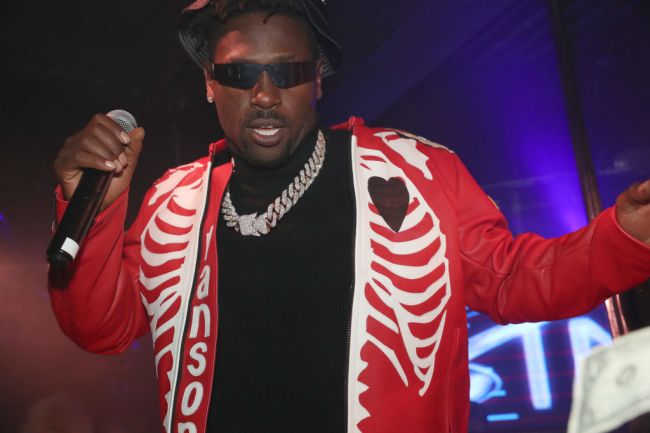 What’s got to be great about being Antonio Brown is that he seems to live in his own world. His perception of reality is entirely different than ours and that’s got to be quite fun. Here he is, leaving his NFL career behind to instead release awful rap singles and he legitimately thinks it’s dope. After all, they say ignorance is bliss and Antonio Brown seems to be the epitome of that ideology at the moment.

During the latest stop on AB’s “Look At Me Retirement Tour”, the former Pittsburgh Steelers, Oakland Raiders, New England Patriots, and Tampa Bay Bucs wide receiver was spotted partying with a truly bonkers cast of characters such as Kanye West, Floyd Mayweather, Madonna, and Uncut Gems actress Julia Fox (who’s rumored to be dating Kanye these days). Just take a moment to imagine what those conversations consisted of.

Brown has been chilling with Kanye West quite a bit as of late, as he was recently spotted meeting the Donda rapper at the Los Angeles restaurant Craig’s. Perhaps most shockingly, Brown admitted to TMZ cameras on his way in that his conduct against the New York Jets wasn’t “necessary or professional.”

Brown’s former and likely final NFL employers, the Tampa Bay Buccaneers, will begin their defense of their Super Bowl title on Sunday, January 16, when they host the #7 seed Philadelphia Eagles at Raymond James Stadium at 1 p.m.

RELATED: OnlyFans Model Who Claims She Hooked Up With Antonio Brown Reveals She’s Made Over $60K In New Subscriptions After The Alleged Tryst